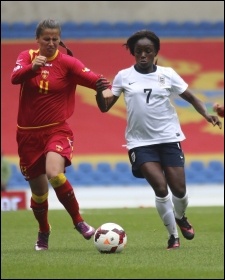 At the start of the summer women's football was riding high. In the build up to the European Championships, England, for the first time in a very long time (in men's or women's football), were one of the favourites. A crushing semi-final exit to the hosts and eventual winners, the Netherlands, ranked 12th in the world to England's fifth at the time, ended hopes of the title.

The women returned frustrated, but could come home with heads held high, Arsenal's Jodie Taylor with the golden boot too. All talk was about the effect of the tournament on the growth of the game. Of using the success of the Lionesses to lift participation in the domestic game and boost Women's Super League attendances.

But this success and the start of the new season have been overshadowed. Goings on off the pitch have rocked the women's game.

The news of an £80,000 payment, seemingly hush money, to Chelsea's Eni Aluko following a complaint she had made about racism and bullying within the England set up was leaked to the press.

England manager Mark Sampson was at the centre of Aluko's allegations. The FA had investigated and ruled there was no case to answer. They also commissioned a lawyer to conduct a further investigation which found the same.

However, the gaping holes in these investigations soon came to light. As well as the mysterious payout for a complaint not upheld, the investigations failed to interview any of the key witnesses in the dispute or review footage before reaching conclusions.

With pressure rising on the FA, Sampson claiming innocence and MPs demanding the FA answer to a select committee over its handling of the affair, the case shows no sign of going away.

So when Sampson was sacked - after presiding over a 6-0 defeat of Russia in England's first 2019 World Cup qualifier - many naturally concluded it was related to the Aluko case.

Except according to the FA, the sacking is unrelated. Instead 'new' information had come to light relating to Sampson's conduct - "inappropriate behaviour" while at Bristol Academy. This allegedly followed FA chief executive Martin Glenn finally reading the report commissioned by the FA in 2015 into Sampson's behaviour, following an investigation that led to him having to undergo a year-long educational course.

How Sampson was able to be appointed to the top job in the women's game following questions about his suitability being raised as far back as 2013, is unfathomable.

Yet the FA did hire Sampson, and ignored complaints about him. And this year they inadequately investigated Aluko's allegations of racism and bullying. Why did they feel the need to protect Sampson? At what point did it become about protecting themselves?

What is clear is that this governing body is less a gatekeeper for the people's game, and more about protecting the reputation of a profitable entity. Those at the top of the national game aren't fit for purpose. An overhaul is needed.