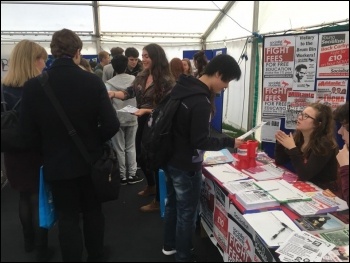 The following brief reports illustrate a hugely successful intervention of Socialist Students during the freshers weeks that have taken place so far.

Portsmouth South constituency was won by Corbyn's Labour on 8 June and we met many students at the freshers fair who had enthusiastically voted Labour to end tuition fees and Tory austerity.

Many have signed up to our Socialist Students society and some new faces came to our first meeting, keen to get campaigning for the student walkout on budget day.

Among those who signed up was a survivor from the Grenfell Tower fire who had lost family members and was furious about the failures of Kensington council and the Tory government. We discussed having a meeting about the fire and campaigning on the issue of housing.

Many student tower blocks are being built in Portsmouth and across the country, with reports that some have a cladding similar to Grenfell and are potentially unsafe.

We have plans for weekly campaign stalls and regular meetings to ensure we get everyone active and reach out to meet more people. Our message is loud and clear - 'Walkout on budget day for free education!'

A socialist society has been established at Woodhouse FE College, north London, after more than 100 students signed up. The first meeting was focused against the Haringey Development Vehicle - a local issue that many were, unfortunately, unaware of.

One topic frequently raised was the college's poor bursary system. Many agreed that action should be taken to improve it. It's likely that it will be the first socialist society campaign in college.

Many of those who signed up were interested in attending Socialism 2017. More generally, the society has been a good way to increase political awareness among students.

The Socialist Party staged a three-day long successful intervention in Newcastle, where stalls were held to build regional support and membership for our Socialist Students.

Students signed our petitions for free education and against austerity, and young people and passers-by expressed their discontent towards the out-of-touch Tory government and its policies of privatised education, extortionate tuition fees, zero-hour contracts, poverty pay, rapacious rent charges, as well as their racist and anti-immigrant rhetoric.

Socialist Students had one of our best freshers week ever in Leeds, with stalls at Leeds University, Leeds Beckett University and Leeds Arts University.

At Leeds University, 185 people left their contact details to get involved - with support for Corbyn and the demand for free education being a real attraction.

25 turned up to our introductory meeting on 'What is Socialism?', and we are hoping for even more new people to attend our second meeting and our abortion rights solidarity demo on 28 September.

Socialist Students had a lively stall at Staffs Uni. We were congratulated by many students we spoke to for actively campaigning to get rid of tuition fees, scrapping zero-hour contracts and for a £10 an hour minimum wage.

Former McDonald's worker Dan told us: "At the age of 16 me and my mate tried to set up a union when we were working for McDonald's but were told that it was not allowed. So it was fantastic to see McDonald's workers taking strike action last week. How quickly things can change."

We gave out around 500 Socialist Students leaflets calling for a demonstration on budget day to demand free education - which got a resounding yes from everyone!

In just two days over 200 people signed up to the society. There was huge enthusiasm for our ideas; people stopped to talk about everything from Corbyn to Sanders, from the weak state of the Tories to the fight for free education.

Socialist Students at University of Liverpool (UoL) is off to a strong start. Our stall outside the uni got 50 students signing up because they agreed with our slogans of "Tories out - Corbyn in! Join the socialists!"

Many were really enthusiastic about getting actively involved in society meeting and activities, and marching against the Tories in Manchester on 1 October.