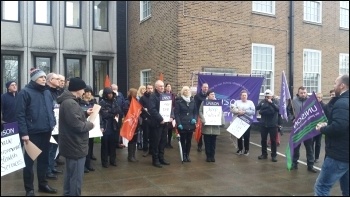 Elected mayor of Salford City Council Paul Dennett has been seen by many as a welcome change to the previous Labour mayor, Ian Stewart, who acted as the Tories' loyal servant in the city. Stewart ruthlessly decimated services for both children and adults with disabilities and attacked trade unionists for standing up for their members. Paul Dennett, as a self-described Corbyn supporter and set a different tone during the election and the first year after being elected.

Dennett verbally opposed austerity, supported Corbyn, and had a friendly, cooperative approach to the trade unions. Because of this, some in the Trade Unionist and Socialist Coalition (TUSC) - at the prompting of the Socialist Workers' Party, which was then a constituent member of TUSC - thought that TUSC should not to stand an anti-austerity candidate against him last year. We thought that this was a mistake and warned that what was needed in Salford was more than a change in words, but a change in actions.

Dennett did not commit to use the position to stop all cuts in the council. We argued that unless Dennett was willing to mobilise a mass campaign to demand the money needed for services in Salford from the government, he would inevitably carry out cuts and come into conflict with working class people. Unfortunately, this is what has happened.

The budget set in February this year included £16 million in cuts, despite Salford City Unison submitting an alternative, legally 'balanced' no-cuts budget. Most of the cuts weren't detailed and instead many services were put up for review.

We argued that a genuine review into services, in conjunction with the trade unions and service users, would be welcome. But, trying to 'kick the can down the road' would just result in making cuts later on.

A no-cuts budget would buy time to start mobilising a mass campaign against Tory cuts, showing the people of the city that the council fights for them. Just delaying implementation of some cuts will not win the mass working class support necessary to wage a serious struggle in defence of public services.

One such decision that has now been made is to close the Grange, Salford's only residential home for disabled children. After years of the Grange being run down, it has now been labelled unviable. Parents and supporters have waged a fantastic campaign to save the home and Unison again submitted alternative options to the council, but the council unanimously voted to close it.

Unison has taken an indicative ballot, which came back with overwhelming support for strike action if redundancies are made or its members are threatened with any detriment to their pay or terms and conditions. Unfortunately, the anti-union laws prevent Unison from balloting against the closure itself, but the local branch has been and remains supportive of the public campaign.

Another crisis that is facing Mayor Dennett follows the tragic Grenfell tower fire. Salford is the city with the largest number of tower blocks which failed tests on their cladding - a shocking 29. Nine of these are owned by the council in the Pendleton area of Salford.

The council had moved quickly in ordering the cladding to be removed but this stopped when the government refused to pay for the costs. The council has now agreed to borrow £25 million to remove cladding from the Pendleton tower blocks. Deputy Mayor John Merry raised at a public meeting that instead of meekly paying the money back, they will instead demand it from the Tories.

We welcome this action by Salford City Council. We have argued for many years that the council can use its prudential borrowing powers to plug gaps in funding, while fighting to get this money back from central government.

Now Dennett must mobilise tower block tenants, trade unions and the wider population in a mass campaign to demand that the Tories pay up, and that all unsafe cladding is removed from buildings in Salford.

The council must also ensure that the other tower blocks in the city that are owned by Salix Homes and City West housing associations - 18 in total - that have failed tests are made safe. These two companies have announced that they will be replacing the cladding, although the work appears to have halted over recent weeks.

While the council does not have direct control over these organisations - after it pushed ahead with stock transfer and privatisation - councillors are still members on the boards and are in a position to put pressure on them to ensure the work is carried out as quickly as possible.

The council's stance highlights that the strategy the Socialist Party has been putting forward is possible. The Grange closure will save the council £300,000 a year. Why not borrow an additional £1 million and keep the Grange open for the next three years?

If Dennett continues to carry out cuts to jobs and services, he will lose support from working class people in Salford and the Corbyn supporters who thought that he would make real change. Jeremy Corbyn and his supporters in the Labour Party need to urgently demand that local Labour councillors fight back, refuse to carry out any further cuts and stand against austerity in action, not just words.