University of Leeds workers walk out over terms and conditions attacks 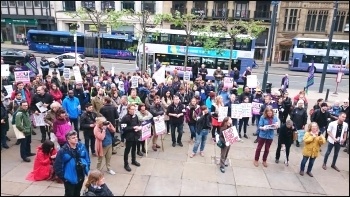 Part of the crowd at the UCU strike rally in Leeds City Centre, 25.5.16, photo Iain Dalton   (Click to enlarge)

Staff at the University of Leeds are taking industrial action in a dispute the University and College Union (UCU) has declared to be of national importance.

UCU members including lecturers and researchers will strike for three days on 11, 12, and 13 October, over threatened changes to their terms and conditions.

The university management wants to make provision to dismiss members of staff on a catch-all basis, known as 'some other substantial reason.' Along with the removal of legally and medically qualified chairs from certain appeals panel, this has left UCU members feeling they have no choice but to take action.

UCU fears staff could be sacked in response to third-party pressure on the university. So, for example, a polluting corporation might take exception to a scientist's work on air quality, and she could find her job under threat. The union says the safeguards the management have offered are not enough.

"The point here is not just that our jobs are becoming more insecure, which is bad enough, it's that the whole nature of universities, as places where people can investigate and ask questions freely without fear of victimisation, is being challenged by the university's management," says Simon Hewitt, UCU rep at the university.

"Capitalism wants universities that supply research and development to companies at tax-payers' expense, and so improve profitability. It does not want universities that ask critical questions about the way the world works. As a trade unionist who thinks that research and education are central to a decent society, I see things very differently."