Biography: Harry Constable in his own words 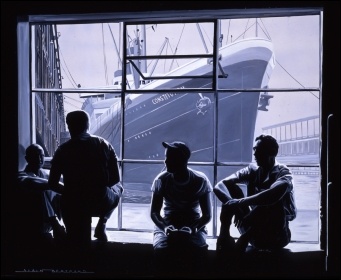 This book is about Harry Constable, a leading activist in the struggle of the dock workers from before the war until the end of the 1950s.

It is told through a series of transcribed tapes he made 20 years ago with Bill Hunter, a member of the 'Socialist Labour League' in Liverpool.

Harry Constable was born into an East End family in London in World War One and grew up in poverty and struggle. His father and grandfather had been dockers and Harry became one after World War Two when he left the army.

His tale is one of obviously heroic struggle against not only the employers but often against the right-wing leaders of his own union, the Transport and General Workers' Union (TGWU - one of the main forerunners of Unite).

Harry, along with other left-wing dockers, was instrumental in setting up what became the unofficial dock workers' strike committees. They organised national strikes against the employers because too often the right wing in the union refused to take action.

At one stage the union expelled him - which under the system at the time meant he could not be a registered docker and was not entitled to work. The other dockers waiting in the "pens," the holding areas where they were called by the foreman to work, refused to "come out" until Harry was given work.

The book explains how the docks became organised over a number of years that led to many strikes, sometimes local and sometimes national, all led by the unofficial dockers' committees.

In 1951, Clement Attlee's Labour government ordered the arrest of Harry, along with other unofficial leaders, for calling a strike in contravention of 'Order 1305'. This was part of the undemocratic government regulations set under emergency wartime powers, and forbade strike action.

This led to a national strike of 45,000 dockers. The Labour government's answer was to send in 22,000 soldiers to do their jobs (which they couldn't).

At the subsequent Old Bailey trial the unofficial leaders, including Harry, were acquitted.

Harry went through many experiences including the 1926 general strike and the battle of Cable Street against Oswald Mosley's fascist Blackshirts.

All in all the book is well worth reading to give the modern generation of class fighters an idea of the rich history of class struggle in the docks.