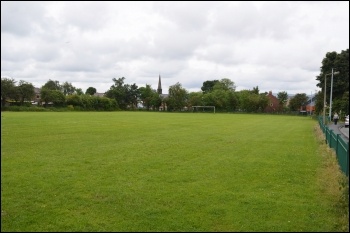 Standish is a former pit village on the outskirts of Wigan, where for some months now residents have been campaigning against proposals to put a car park on the local recreation ground, which was bequeathed to Standish in 1923 for the purpose of a children's playground.

Over the years it has been used by local children for play, football games and by groups such as the Cubs and Brownies.

The car park proposal has come from the local 'neighbourhood forum', misleadingly calling itself Standish Voice, an organisation that many residents believe is more concerned with promoting the interests of local businesses, rather than ordinary residents.

Although Standish Voice is technically open to all Standish residents, at times it behaves in a thoroughly undemocratic manner, and has expelled at least three people with no notification, hearing or appeal. All three have been prominent in campaigning against the car park proposal!

The results of at least one consultation exercise conducted by Standish Voice have never been published, presumably because they did not endorse the aims of Standish Voice.

In response to the threat, a 'Don't wreck our rec' group has been formed, which has organised a public meeting, a petition, Saturday street stalls, and has lobbied Standish Voice, Wigan council and the Wigan Labour MP, Lisa Nandy. Organisations like Sport England have also been contacted in order to get advice, and to alert them to the threat to the recreation ground.

This excellent example of local campaigning has put pressure on Standish Voice, to the extent that they have now published the draft neighbourhood plan for public consultation, which has dropped the car park proposal, in favour of putting a park on the recreation ground.

However, elsewhere in the plan it seems to suggest that the car park proposal could be revived in the future. Future campaigning will therefore focus on welcoming this climb down, while alerting people to the continuing threat, in order to encourage a robust response to the consultation, making it clear that the recreation ground must remain a green space.