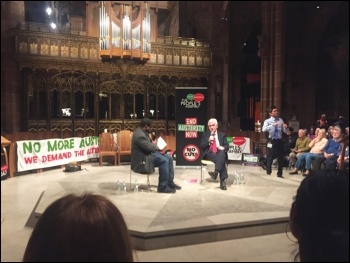 Crowds poured into Manchester Cathedral on 2 October to see the shadow chancellor John McDonnell at a free event. The audience was first greeted by various trade union speakers, including representatives from the transport union RMT, Communication Workers Union and public sector union Unison giving their perspectives on ongoing industrial battles and the growing fight encapsulated in the march against Tory conference the previous day.

But perhaps the highlight of the early speakers was Shen Batmaz of the McDonald's strikers in the bakers' union BFAWU. Batmaz ended her address with some of the most striking words of the night: "Young people around the country are angry. They're ready to unionise. But they're waiting for the trade union movement to stop saying we're 'un-unionisable' and for them to help us in organising."

Following this, McDonnell took to the stage facing rounds of passionate applause from the attendees before delivering the anti-austerity message seen in Labour's election manifesto. The event transitioned to a one-on-one interview with Guardian journalist Gary Younge. They discussed issues such as renationalisation, fighting cuts to health and education, guaranteeing the rights of EU nationals to remain in the UK following the Brexit negotiations and banning fracking.

The event was rounded up with a very apt summary of what socialists should all stand for: "We don't believe in just instituting a few reforms here and there. We believe in changing the system so we will never again have to pay for the crisis that they created."