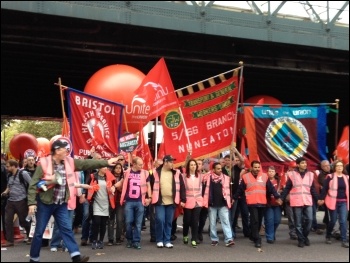 Local government trade unions have lodged a national claim for 5% - but so far have done nothing effective to win it. Instead, nationally all is on hold awaiting a response from the employers.

There are, of course, individual exceptions, such as the magnificent bin workers in Birmingham. In London, the region is running a campaign with the aim of coordinating action among members working for the huge number of contractors who now run council services.

The campaign involves lodging a mirror 5% claim with employers such as Greenwich Leisure Limited and others. Workers employed by OCS/Babcock to clean schools under a Hackney council contract have already agreed to ballot for strike action after the employer refused to consider the claim.

What this shows is just how easy it really is to coordinate a campaign across different employers and different sectors. The motion highlighted how the Tories are trying to divide workers by offering pay rises to the emergency services while still attacking workers in local government. This makes a joint campaign all the more vital.

The majority of Labour Party councillors have been silent on the issue. Ending the pay cap would need to be fully resourced and not paid for by cuts to jobs and services. A resolution to be heard at Greenwich council is calling on the chancellor to provide adequate funding, but apart from sending a letter, proposes no further action!

At the local government meeting, the example of the CWU gaining a strong majority on a high turnout for industrial action did not go unnoticed by delegates. The work being undertaken by the PCS, which is holding a consultative ballot over the pay cap, can be replicated across the public sector unions.

The TUC rally in central London on 17 October, while welcome, isn't enough - a national weekend demonstration combined with coordinated strike action across the public sector is the way to really break the pay cap. It is also welcome that Len McCluskey has stated that Unite would support strike action even if it doesn't meet the threshold set by the draconian Trade Union Act.

In Greenwich, Unite is lobbying the full council meeting on 18 October to send a message to the Labour-dominated council. This should be replicated up and down the country.