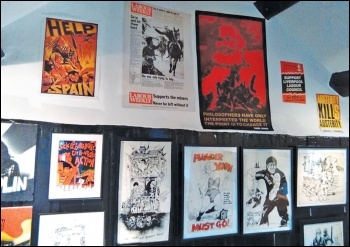 Part of the Bad Art exhibition in Skipton, October-November 2017, photo by Paul Gerrard   (Click to enlarge)

Skipton is a quiet market town better known as the 'Gateway to the Yorkshire Dales' than it is for revolution. But on 6 October, socialist artists and activists, as well as the general public, from Manchester, Lancashire and Yorkshire gathered to view a dazzling selection of work by artists loosely grouped around the 'Bad Art' project.

Here were surrealist collages, intricate installations, disturbing paintings, photographs of demos, bold placards, banners, posters and cartoons in amazing variety. There was no monopoly of style or political position.

'Bad Art' is not a school or genre, but an international campaign which recognises that art can inspire us in our struggle for socialism, and that imagination must be part of the DNA of a socialist future. Several of the exhibitors here have had no formal artistic training, but have a passion to create.

The organiser of the show, surrealist artist and Socialist Party member Peter Harris, explains: "The diversity of the show was my main focus... The arts enrich our lives, as does the power of the imagination - and although completely focused on the primary need for a socialist transformation of society, we must never lose sight of the importance of creativity."

Alan Hardman, the respected Socialist Party cartoonist whose work has appeared in Militant and the Socialist over four decades, was present to meet visitors and talk about his work. Unfortunately, Jean Stockdale, an internationally known 'outsider artist' who was inspired to exhibit there, was unable to attend.

The 17th century Mill Bridge Gallery, overlooking the 18th century Leeds-Liverpool Canal, provided a fitting setting for art which points to a socialist future. The event was attended by 80 people, more than any other preview at the gallery.