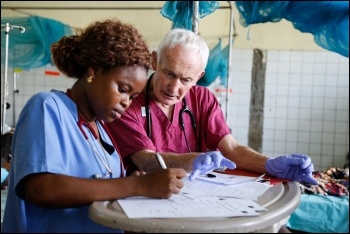 In the week of Halloween, a truly chilling proposal haunted the NHS under Theresa May's zombie government. Start-up company 'CareRooms' set up a stall in the canteen at Southend University Hospital to find Airbnb-style 'hosts' to take in recovering patients.

It was looking for people who live locally and have a spare room to house hospital users for £50 a night. Hosts would be asked to welcome patients recovering from minor procedures, cook three microwave meals a day, and offer conversation.

According to CareRooms, the scheme targets patients who do not have a family to care for them at home.

Southend Hospital pulled out of the pilot as soon as the story broke. But the supposed justification for the scheme was a 40% increase in so-called 'bed blocking' - peaking at up to 6,000 a day, and blamed by one research team for up to 8,000 deaths.

However, the villains of this horror story are not vulnerable people stuck in hospital beds. It's vampire-like cuts and sell-offs that are sucking the lifeblood out of the NHS and social care.

The Tories and Blairites have drained the whole system of resources, from the moment you walk through the door at A&E to the aftercare at home. Gig economy models like Airbnb are part of the problem, not the solution.

CareRooms is part of the NHS 'clinical entrepreneur programme'. The very existence of that government project reveals the spreading tentacles of private interests in public healthcare.

The chair of one of the Tories' 'sustainability and transformation plan' cuts schemes, Mike Bewick, is an unpaid advisor to CareRooms. Bewick is also NHS England's former deputy medical director. There's a revolving door between management overseeing cuts and privatisation, and firms seeking to profit from it.

What the NHS truly needs is a stake through the heart of all privatisation. The Socialist Party campaigns for an NHS fully funded, fully staffed and free at the point of use. Only a socialist programme can end the Tory and Blairite nightmare in our NHS.

Discussions include: can NHS privatisation be stopped before it's too late?