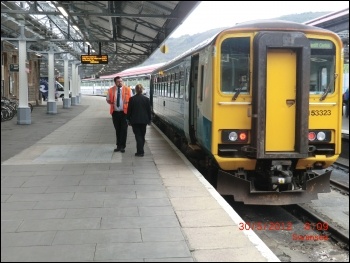 Workers will walk out on Southern, South Western Railway and Greater Anglia for 48 hours from 8 November and will be joined by those on Merseyrail and Arriva Rail North for 24 hours on the same date.

The RMT has been in dispute with Southern for over 18 months now with strike action spreading to Merseyrail, Arriva Rail North and most recently Greater Anglia. South Western Railway will be taking action for the first time.

Train drivers' union Aslef has held talks with Southern and is currently balloting members on a deal to end the dispute there. Though Aslef rejects DOO, the deal would accept the argument for train guards becoming non-safety critical and for trains to run without them under various operational circumstances.

The result will be known on 8 November - the same day as the RMT strikes. Aslef members on Southern should reject this deal. If they do DOO extension will suffer a fatal setback.

It's clear the government is using Southern as its battering ram to begin the final destruction of the guard grade on Britain's railways. Any settlement which allows a passenger train to run without the second member of staff - under any circumstances - will open up a breach in the battle to retain a safety-critical second member of staff on trains.

The Socialist Party supports the RMT's strike action. DOO should be totally eliminated from the railway, not extended.

Discussions include: Labour and the trade unions