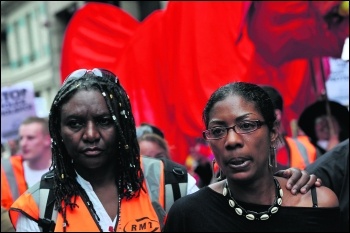 It was heartbreaking to take part in the annual march of Unite Families and Friends Campaign (UFFC), made up of those affected by deaths in police custody, prison and similar situations as more families "joined the club no-one wanted to be part of."

UFFC was originally set up to network black families affected since the death of Leon Patterson in 1992. The campaign includes people of all ethnicities who have been hit by police abuses. They particularly affect working class people.

The march on 28 October ended with speakers - the sons, daughters, mothers, nephews and others related to those who had died. It linked to the wider unnecessary deaths of working class people in Grenfell Tower.

The daughter of one of the Hillsborough victims also spoke of how she had been taken into care after her mother was killed and fought to defend her mother's name due to the vile ways in which the media and state attempted to undermine those who seek justice.

All those who spoke faced massive barriers getting information over what had happened and any attempt at justice. Some have become aware of also being spied upon by undercover police surveillance, including those seeking justice for the murder of Christopher Alder from Hull.

Family after family not only showed the ways lives were being stolen by the state but also how families and friends can and will stand up for justice, despite the trauma they are facing.

Solidarity and practical support was encouraged, inviting families to meetings, sharing information online and backing up calls for change:

Themes for discussions include fighting racism