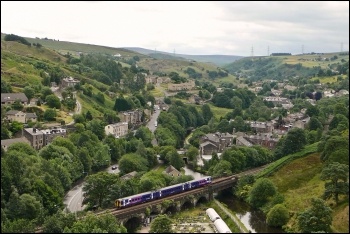 One resident at a recent meeting in Todmorden shouted out at Tory MP Craig Whittaker: "We know who you are Whittaker - a friend to the builders!"

The government currently requires local councils to produce a local plan which identifies land to meet their requirements for new housing and economic development, over the next 15 years.

The latest estimates indicate that Calderdale, West Yorkshire, will need over 17,000 new houses by 2032.

Calderdale council wants to build somewhere in the region of 7,000 homes on local green belt land in the near future through this plan.

Whittaker and the council representatives failed time and again to recognise the housing crisis in this community, which of course, is mirrored around the country. These will not be affordable homes and will also be built on a flood plain as well as placing a heavier burden on the town's roads and services.

Whittaker said of the Labour-run council: "The council has serious questions to answer about the way in which this consultation process has been managed and publicised and they urgently need to take steps to rectify this." This is true but it is the Tory government and Communities Minister Sajid Javid who are creating the proposals in the first place.

The whole process has been a farce from day one, with forms to submit objections being delayed by a system that clearly could not cope with the number of objections to these plans.

This was clearly demonstrated at the packed public meeting with 200 people in attendance. Fair to say Whittaker did not have an easy time, struggling to respond to fears and concerns.