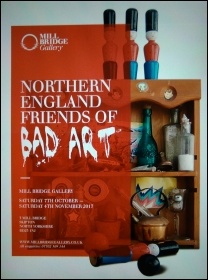 One in six people have never visited an art gallery according to a recent survey for gallery Rise Art, no doubt due to feeling intimidated.

So how did we manage to attract nearly 100 people and local press coverage to a political arts event, the 'Bad Art' Skipton exhibition?

We stressed that all ten artists are socialists and internationalists - and that as supporters of the Bad Art campaign we are not just another art group. We are active in the fightback against austerity, and the struggle for a society of freedom for artists and all workers: socialism.

On entering the gallery, visitors passed through trade union banners and photographs of demonstrations, and could read statements of our political aims.

In the exhibition itself you were immediately confronted with a diversity of artworks. Some made overtly political points. Others were more surreal, but nevertheless presented another world view.

This diversity of work was underpinned by our stressing the primary need for the socialist transformation of society. It made the show a vibrant success, particularly for the young people who attended. We raised money through programme sales and donations.

As socialists, involvement in the arts can be an extension of our main day-to-day political campaigning. The Bad Art project, initiated by members of the Socialist Party and its sister organisations around the world, aims to help further that.

Discussions include: can art and literature provide a voice for the left?