Link to this page: https://www.socialistparty.org.uk/articles/26399 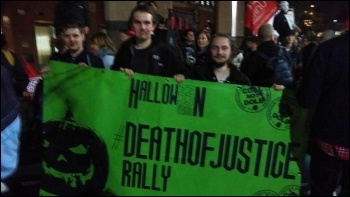 Chants of "by Amber Rudd and Theresa May, justice was killed a year to the day!" reverberated around the streets of Sheffield on Halloween night, 31 October.

The vibrant, colourful, noisy march of 300-400 was organised by the Orgreave Truth and Justice Campaign (OTJC) on the anniversary of Tory Home Secretary Amber Rudd's refusal to hold an independent public inquiry into the events of the "Battle of Orgreave" on 18 June 1984 during the year long miners' strike.

It was at the Orgreave coking plant on the outskirts of Sheffield that mounted police, batons drawn, charged into the crowd of striking miners who were holding a mass picket.

After miners were beaten up, they were fitted up and locked up on false police statements by some of the same South Yorkshire police that lied about the Hillsborough disaster just five years later.

Despite the collapse of the subsequent trial of 95 miners who were charged with 'riot' and 'serious assault', and the evidence of police brutality and of perjury, no officer has ever faced disciplinary action for their role or faced charges.

OTJC was set up to fight for an independent public inquiry that will reveal the truth about the role of the police and of the Thatcher government, and get justice for the ex-miners who were beaten up and falsely accused.

Amber Rudd refused an inquiry because she said nobody died, but truth and justice died. The Halloween demonstration was a real life nightmare for the Tories - led by a 'death of justice' coffin and the fantastic PCS civil service union samba band, with many dressed in scary monster and zombie costumes wearing Thatcher, May and Rudd masks.

The Sheffield Socialist Students contingent made a big impact on the night, marching down from the university to join the demo, and leading the chanting on the march.

All the speakers welcomed the Labour Party's commitment to hold a public inquiry once in government, but the biggest cheer of the night came when ex-miner John Dunn called for revenge against the system by not just fighting for a Corbyn-led government but for a socialist society.