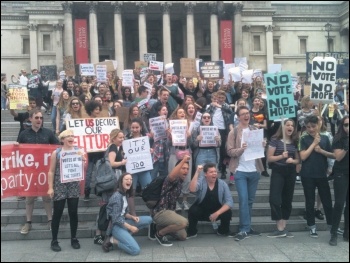 The Tories have once again tried their level best to sabotage the futures of young people in Britain. On 3 November, MPs debated a new bill to lower the voting age to 16 in UK general and local elections, as well as referendums.

However, the Tories sabotaged the bill by 'filibustering' it, deliberately giving long speeches in the Commons to waste time and have the debate timed out.

In two years' time, today's 16 and 17-year-olds will be able to vote either way. They will remember who blocked them from having that democratic right.

In spite of this, the Tories had good reason to sabotage the bill. It was young people, after all, who were the driving force behind the Corbyn surge in the June general election.

Up to 67% of 18 to 24-year-olds voted for Corbyn's policies. These included free university and college education, restoring 'Education Maintenance Allowance' further education payments - and, yes, lowering the voting age to 16.

Handing the right to vote to 16-year-olds would ensure the end of their already weak and divided government. And once they're out, what young person would want them back in?

But we don't need to wait for five years to see Corbyn's policies become a reality. Since the general election, the Tories have already been forced into retreats over a number of issues, and are in the throes of yet another scandal.

School, college and university students should join Socialist Students' national day of action on 22 November. Organise a walkout on your campus in protest against the Tories' sabotage of the democratic right to vote.

Actions like this, starting on budget day, could help build a movement of workers and young people which can force this already dying government out of office. Along the way, we can win hundreds of thousands of college students their right to vote.