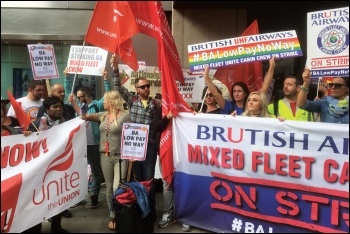 2,000 low-paid Unite members took a total of 85 days of strike action, which began in January 2017. Their upbeat singing "mixed fleet on fire" and dancing picket lines have been a feature of the struggle.

This year's struggle had its roots in the bitterly fought BA cabin crew dispute of 2009-11. One of the key triggers of that dispute was precisely the bringing in of cabin crew on new inferior contracts.

Therefore, in these circumstances, it has been a herculean effort by the union and the reps to forge a fighting force that could take on a vicious employer. Over 1,000 new recruits have been won to Unite during the course of this year's action.

The settlement deal will see workers get a pay rise of between £1,404 to £2,908 by March 2018, and some of BA's attempted vindictive strike-breaking measures have been lifted.

Those crew who went on strike will have their withdrawn travel concessions restored, along with being able to fully participate in the airline's 2017 bonus scheme. It will also see the settlement in full of Unite's legal action on behalf of crew who had been sanctioned for striking.