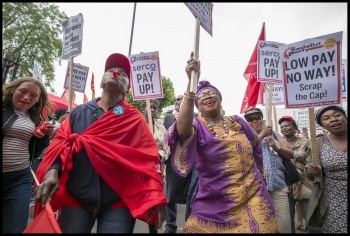 Unite's national industrial sector conferences, taking place in Brighton between 11 and 14 November, deal with policy for members in their workplaces. They can be important in setting the agenda to take on the bosses and the Tory government.

The re-election of Len McCluskey before the general election was a defeat for the Blairites who wanted to use a victory by Gerard Coyne, McCluskey's main rival, to take the union to the right and also attack Jeremy Corbyn's leadership of Labour.

This must now be built on industrially and politically as workers face a weak and divided Tory government.

Pay is the overwhelming issue facing workers, in the face of rising housing costs and prices, following years of pay restraint and cuts.

In the public sector, the key question is smashing the government's pay cap. Unite is involved in claims for both local government and NHS workers which break the 1% increase limit.

There, and in other industries, Unite must lead by proposing effective action to win these claims.

Unite should follow the example of civil servants' union PCS which has organised a consultative ballot of its members on their willingness to take action to break the cap.

If Unite ballots its members in the public sector, it could galvanise the campaign to end pay restraint. Unite should join PCS in calling for the Trade Union Congress (TUC) to coordinate strike ballots across the public sector. If the TUC leaders won't act then Unite should take the lead in bringing unions together to organise joint action.

This campaign should also be taken into the private sector where, despite the bosses making billions in profits from workers' labour, pay has been held down and redundancies made.

At the same time, private sector pension schemes have also been raided by the bosses, as the examples at Tata Steel and elsewhere show.

Unite has led some important disputes recently, notably the struggles over pay at Serco in the Barts NHS Trust and BA mixed-fleet cabin crew.

It has shown itself prepared to take on cutting councils, including Labour-controlled Birmingham council, where bin workers have refused to accept attacks on pay, terms and conditions.

Linking up the battles to come, of Unite and other unions, in coordinated action, can force this hated Tory government out and bring in a Corbyn-led Labour government, which Unite should influence in a socialist direction.

Tuesday 14 November, 5.45pm or at end of conferences

Fighting back against the Tories!