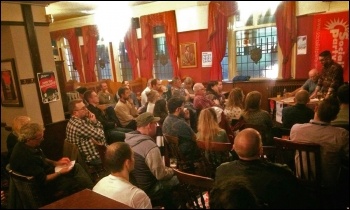 Birmingham Socialist Party branches organised a public meeting at the end of October to mark the centenary of the Russian revolution. Peter Taaffe, general secretary of the Socialist Party, was the main speaker. Over 50 attended, including many young people.

Peter explained the tsunami effects around the world of the first workers' state to be established and the influence of socialist ideas led by the Bolshevik Party.

Against the hostility of world capitalism, it inspired workers in the advanced capitalist, as well as the colonial countries that they could throw off the yoke of exploitation to build a world free from war, inequality and starvation. At the same time, planning resources on a world scale could ensure the welfare of the planet.

Peter also spoke about the right to self-determination of countries that had been dominated by Russian imperialism. The Bolshevik Party raised this during the revolution, which in the majority of cases won over the populations of these nations to the revolution.

The Soviet government immediately granted full independence to Finland. Peter linked this to what is happening in Catalonia's struggle for independence today against the capitalist Spanish state and the repression being implemented.

Finally, Peter drew out the lesson that capitalism today can no longer develop science and the productive forces. Eight billionaires have as much wealth as the poorest 50% of the planet! Only workers can once and for all solve the crisis of world capitalism by building a socialist society.