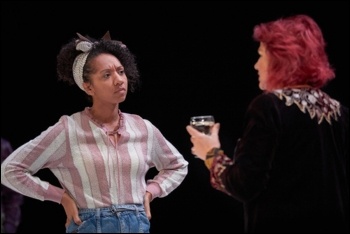 Gary Owen's adaptation of 'The Cherry Orchard'   (Click to enlarge)

The Cherry Orchard is set in Pembrokeshire, Wales, in 1982. Yes, that's right. It's a modern retelling of the original written by Anton Chekhov just before the first Russian revolution in 1905. And it's brilliant.

Action revolves around an old manor house on the west Wales coast, home to farms, orchards, a wealthy family and the estate's workers. But there's trouble ahead. The bank is threatening repossession, forcing the family to find a solution or lose everything.

The supposed head of the English landowning family is Rainey, the perfect embodiment of her class. She is arrogant, lazy, with complete contempt for her staff, the poor, the Welsh, even her own family. She is forced to return from living it up at the Dorchester in London to address the crisis.

As the family argues, the dialogue is hilarious and peppered with references - both musical and political - to 1982: music and the class conflict of Thatcher's Britain.

The latter is injected by bolshie locals Dottie, the manor's housekeeper played brilliantly by Alexandria Riley, and Ceri, an unemployed socialist who falls in love with one of the family's daughters.

Both are funny, passionate and angry; quick to defend their local council estate, and remind the family of some home truths.

There are numerous examples of the difference between these two worlds. But the most striking is death and grief.

It affects everyone, of course. But Dottie rages at the fact her first day working at the manor, at the age of 16, came the day after her father died.

She was forced to work to keep food on the table. Meanwhile Rainey, after her own loss, set herself up in a posh London flat and went on a ten-year bender.

I've not seen the original, but a glance at its plot shows the themes remain the same. An out-of-touch upper class; gross inequality; the masses and poor increasingly confident - all set to the backdrop of great change around the corner.

Part of 'R17', a series of events by arts organisations in Wales to mark the centenary of the Russian revolution, this play is worthy of the connection - as well as being a laugh-out-loud funny, engrossing, thought-provoking drama in its own right.