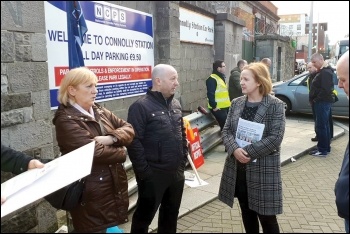 Rail workers in the Irish Republic walked out on 7 November for 24 hours, the second stoppage in their demand for a 3.75% pay rise.

More and longer strikes are planned (14 and 23 November, 8 December) in the run-up to Christmas by unions representing members in Irish Rail. Many workers say they have not received a pay increase in the last ten years and that the pay demand is in line with settlements won by transport workers in Luas (tram) and Dublin Bus.

Irish Rail management proposals effectively propose a wage cut of €60 or more a week for many workers. They are also demanding increases in 'flexibility' and attacks on the workers' pension scheme. In total, there are no less than 18 conditions attached to its derisory 1.5% wage increase proposal.

Strikers are angry over the recent dismissive comments of Taoiseach (prime minister) Leo Varadkar who said the strike will end in a deal that "will be no different than if there'd be no strike at all".

Irish Rail has shed up to 5,000 staff in the last ten years. The yearly state grant is still €90 million below what it was in 2008. Yet passenger numbers are going up year by year - from 2.3% in intercity services to as much as 7% in Dublin Area Rapid Transit services in 2015 alone.

Irish Rail management and this right-wing government continue to drive home an agenda of underfunding, outsourcing and privatisation.

A bold industrial strategy by the unions should be linked to the demand for government investment to develop a public transport system that respects its workers and delivers an integrated service for people.

"Government to blame for rail strikes. No pay increase for railworkers in ten years. Support their stand for pay justice."

"I was on the picket lines this morning at Connolly Station supporting workers who are against the race to the bottom and wage restraint... We are meant to be in recovery, so it's time for a recovery for workers and not just the billionaires."