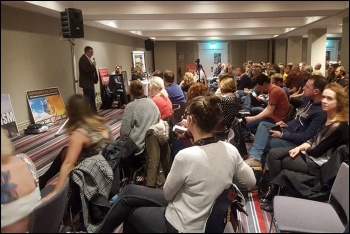 The Socialist Party in Ireland hosted its second 'Dangerous Ideas' event on 3 and 4 November in Dublin. It was a great success with a lot of interest in socialist ideas and the Socialist Party. Around 350 people attended.

There were four major debates involving Socialist Party members discussing with representatives from the Repeal movement for abortion rights, the left, the media and the capitalist establishment.

There was also a wide variety of discussion including on the lessons of the Russian revolution and a packed session on how socialism would work. International speakers included Eljeer Hawkins from the US, Oleg Knyazev from Russia and Hannah Sell from the Socialist Party in England and Wales.