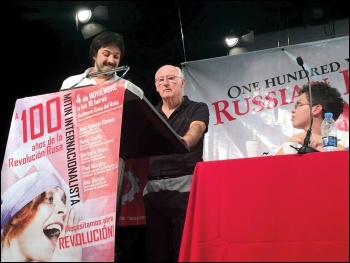 Peter Taaffe speaking at the rally for the centenary of the October revolution in Madrid, 4.11.17, photo by Izquierda Revolucionaria   (Click to enlarge)

On 4 November, 250 workers and youth attended a vibrant rally to celebrate the centenary of the October Russian revolution in Madrid. Taking place in the context of the ongoing revolutionary crisis in Catalonia and the Spanish state, the meeting emphasised the relevance of Bolshevik ideas in the current battles to do away with capitalism and change the world.

Peter Taaffe underlined the importance of the Bolshevik struggle in opposition to national oppression, which remains a key weapon in the arsenal of Marxists today in Catalonia and elsewhere, in the struggle to build a mass revolutionary international.