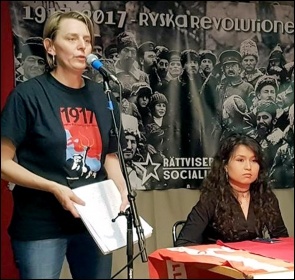 Revolution2017 took place in Stockholm on 4 November and was a great celebration of the Russian revolution and the linking up to today's class struggles. 180 people attended the event which included seminars, panel discussion, art, music, poetry and a great rally.

Among the speakers was Ruben Fernandez, Izquierda Revolucionaria (Spain) Clare Doyle, Committee for a Workers' International (CWI) and Sascha Stanicic, Sozialistische Alternative (Germany). The appreciation of the audience was reflected in the financial appeal which reached 100,000 Kronor (over £9,000), the highest ever for Rättvisepartiet Socialisterna (CWI Sweden).