Link to this page: https://www.socialistparty.org.uk/articles/26446 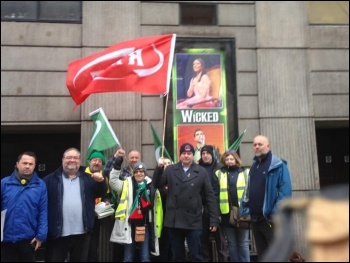 Drivers at GTR Southern have finally voted to accept a deal which was recommended by the Aslef union leadership, which allows trains to run without a guard.

This will be seen by workers across the national railway and beyond as a historic betrayal by Aslef, aided and abetted by the TUC, which has pushed their lower-paid team mates, the guards, one step closer towards elimination from Britain's railways.

Presented with a whopping 28% pay rise Aslef leaders needed to put the offer to members via referenda no fewer than three times before it was finally accepted.

But it was accepted and it is the clause stating that driver only operation (DOO) is allowed under 'exceptional' circumstances that gives the bosses the weapon to finish the process of changing the whole of Southern's network to DOO.

DOO leaves disabled people unable to 'turn up and go' and must pre-book their journeys, many people are less willing to travel alone at night and the driver is left to deal with all emergency situations alone even when incapacitated or following a fatality.

The Tories want DOO to be the norm on the railway in an attempt to drive down costs and the RMT union, which represents all grades of rail worker, has been fighting its introduction along with all other staff cuts since day one.

It has been reported that Aslef faces massive legal costs in addition to the £250,000 already levied against the union by the courts as a result of the anti-trade union laws relating to earlier action.

This is likely to have been a motivating factor in Aslef pushing for acceptance of the offer. However this shabby deal needs to be seen as what it is: a sell-out and no less, and rank-and-file Aslef members should remember this capitulation whenever their leadership makes any future public commitment to jobs and safety.

However, despite this serious setback the struggle against DOO can still be won. Guards at five train companies - including Southern - are taking rock solid strike action this week in defence of their role and for railway safety. So far the guards have won a guarantee of a second person on trains in Wales and Scotland.

In poll after poll the travelling public overwhelmingly want to keep guards on trains.

Most passenger trains in Britain still run with a guard and the vast majority of drivers do not want to take on the additional responsibility and risks of station dispatch and the other roles performed by the guard.

The resolve shown by the GTR Southern guards has been inspiring and is an example of the kind of persistence against the attacks of the government and GTR Southern management that is needed to defend workers across all industries.

Unity of all railway workers is needed to stop the race to the bottom and uphold the principal of a safe and fully staffed railway.

The drivers have a vital role to play in this campaign. But there can be no more deals in the future like the one made with GTR Southern.

Aslef members at all the other train operating companies must urgently sit down with their workmates in the RMT and form a united front from the bottom up, against all job cuts and against our common enemy, the railway bosses.

This version of this article was first posted on the Socialist Party website on 9 November 2017 and may vary slightly from the version subsequently printed in The Socialist.