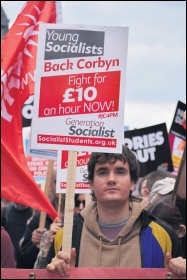 Labour-controlled Preston Council has received press coverage as "beating Tory austerity" (Mirror), "where workers are in control of wealth" (Guardian) and "Jeremy Corbyn's model town" (Economist). Is this too good to be true?

There have been positive initiatives taken by the council. For example, it's an accredited Living Wage employer. It has put an emphasis on contracting local firms rather than big businesses. It's setting up a credit union, and has set up a council-owned energy supplier.

The council claims these measures have resulted in a massive increase in money spent in the local economy. This is all well and good. But there are hard limitations to what it can achieve. And meanwhile the council has cut jobs and privatised services!

Similarly, a council-owned energy supplier will be able to save some people money. But it cannot sustainably compete with the cartel of the 'Big Six'.

Of course creating jobs is a good thing. But the private construction company held up for doing so, Conlon, has only created a handful. And the jobs created by Preston's focus on attracting more shops and restaurants to the high street will be of the low-paid, zero-hour type.

And many Preston initiatives are not positive at all - such as privatising leisure centres, and charging for bin collections, as part of the city's cuts budget.

The council is backing the Lancashire 'sustainability and transformation plan' in the NHS, which will mean massive cuts to hospitals. It aims to copy the 'housing boom' in Manchester by attracting private developers to build luxury apartments - with very few plans for affordable housing.

Meanwhile, homelessness is a growing problem. The council puts out propaganda that 80% of people on the streets aren't "genuinely homeless." It has brought in a rule that "beggars" will be given five minutes' notice to move on - or they will be fined or taken to court!

Many of the positive proposals in Jeremy Corbyn's hugely popular manifesto do not yet go far enough. For example on energy companies. We argue the sector must be nationalised, ending the control of the Big Six. It will be even harder to carry out these half-measures effectively in just one city.

And Preston's measures are not even far-reaching enough to deal with the issues people are facing through the austerity it continues to implement: low pay, rising living costs, lack of decent jobs and more.

The way for councillors in Preston to start "beating Tory austerity" is by refusing to pass on Tory cuts. This means using reserves and prudential borrowing, and mobilising a mass movement to win the money back across Lancashire - almost £300 million by 2020.

If Corbyn and McDonnell backed 'model towns' like that - and promised to reimburse them on coming to power - they could bring down this hated Tory government now.