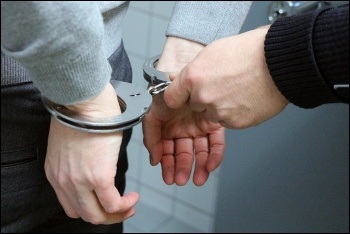 Many inmates, young and adult, should be in care or probation, not prison   (Click to enlarge)

No to profit-making prisons

Thousands of young people have been harmed while being 'restrained' by officers in secure facilities.

Around 4,800 under-18s have been injured this way in young offenders' institutions and 'secure training centres' since 2010, figures obtained by a Labour MP indicate. Meanwhile, the Commons recently discussed reforming physical restraint of patients in psychiatric institutions.

The Socialist Party would welcome measures improving the accountability of staff in all detention facilities. Scandals in recent years have uncovered appalling psychological and physical abuse in privatised institutions.

We demand a full, genuinely independent inquiry into these horrendous revelations, led by the trade unions.

The working class is ever more accustomed to 'official', 'independent' or 'public' inquiries devolving into blatant miscarriages of justice. Instead of providing answers, the establishment deliberately uses them to draw out proceedings and muddy the waters, counteracting any accountability.

Legislation from up high - while important - would not on its own be sufficient to improve the dreadful regimes in these institutions. For a start we have to kick out sinister privateers like G4S.

And only the active, democratic control of workers and communities can ensure accountability and protect the lives of often vulnerable people.

Many inmates should be in care or probation, not locked away in profit-making prisons.