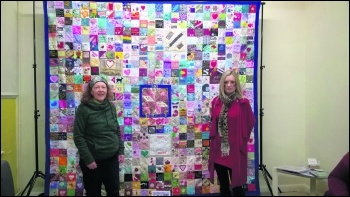 A spirited and determined 'Reclaim the Night' march, organised by and for women, wound its way through the Saturday night revelry of Nottingham city centre on 18 November. The crowds were mostly supportive and even the buses and other traffic didn't seem too bothered by their unexpected delay.

The struggle against misogyny and violence against women has become even more intense, post-Donald Trump's election combined with the onslaught of austerity on women's lives.

Val Lunn from Women's Aid Nottingham spoke about the potentially catastrophic plans of this Tory government, led by a female prime minister, to change the funding for Women's Aid nationally. Rather than the money going to Women's Aid directly, they plan to give it to local councils with apparently no ring fencing. When councils, including Labour ones, have played fast and loose with vital services, closing many regardless of their impact on staff and local users, Women's Aid is right to want to plan a campaign to defend their refuges across the country.

The rally stood for a minute's silence for all those women who have been killed by partners or ex-partners and a patchwork wall hanging in the women's centre, with a named patch for each of the 598 women killed between 2009 and 2015, was a poignant reminder of how important women's refuges are. Yet many are closing and others frequently turn away women and their children fleeing domestic abuse because of lack of space.

A programme to defeat misogyny and violence against women is vital. As one placard said: "I can't believe I still have to put up with this shit". We need a campaign against austerity and misogyny that takes up the causes of women's oppression and unites with the labour movement.

Members of the Socialist Party are already prominent in campaigns to save women's centres in Derby and Doncaster. Linking up campaigns nationally could strengthen each one. Taking the campaigns into the labour movement, in the way the brilliant Socialist Party-led Campaign Against Domestic Violence did, can increase support and help build the fight back.