Humour - Jonathan Pie: Off the Record 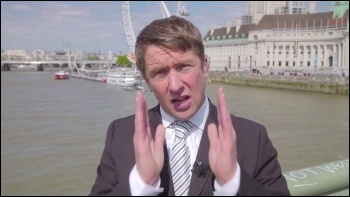 Jonathan Pie is the fictitious journalist created by comedian Tom Walker. Here he and Pie cowriter Andrew Doyle give us a book as written by the unhinged TV reporter.

But first up is Tony Blair. This chapter is extremely relieving for those of us on the left who saw Blair for what he was: the end of Labour. In fact, Pie says as much.

He hates Blair most of all not for the Iraq war, but for "destroying the Labour Party and all that it stood for... the equivalent of taking the Sistine Chapel and giving it the once-over with a Dulux roller."

It's enjoyable reading Pie attack politicians because he takes your anger and channels it into the kind of language you may use had you met any of these characters down the pub.

He says he never trusted Blair - "even when Diana died, he looked like a robot testing a new grief algorithm."

The book is funny. An added dimension is Pie's use of footnotes to insult the reader. It's all in good measure.

The footnote on the Third Reich reads "are you seriously telling me you need a footnote to explain the Third Reich... You're a fucking idiot." There is - and if you know the Pie videos you won't be surprised - lots of swearing on the way.

What Jonathan Pie does best is make basic left-wing political analysis entertaining. This would be a great book to give to someone who says they don't know much about politics. It gives you a left perspective on figures throughout history, and makes you laugh.

Pie invites disagreement and debate, which is refreshing as some leading figures on the left seem to want to shut it down.

He is most admirable because his analysis always seems to have the working class at its core. He doesn't offer many solutions - but never said he would.

The chapter discussing his vote in the EU referendum is particularly funny. It involves too much alcohol and Captain Kirk's ghostly visit to him in the polling booth. You'll have to read the book to see which way he voted.

Some of his comments are tenuous. The chapter on Simon Cowell's connection to Trump taking office I didn't buy, but it still made me laugh.

All in all, a worthwhile read. And the chapter ripping Margaret Thatcher will have you in tears.