From The Socialist newspaper, 29 November 2017 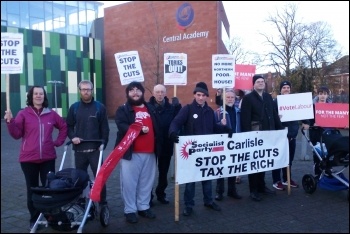 At short notice, Carlisle Socialist Party organised a protest on the morning of 24 November to greet the high priest of austerity himself - George Osborne. He was visiting a local school with the city's Tory MP - slumming it in the 'Northern Poorhouse' he spent six years making even poorer!

Despite protesters covering two entrances, they managed to sneak him in a side entrance.

Incredibly, local Labour councillors made a public statement welcoming some of his proposals without criticism. This was a slap in the face for the rank-and-file Labour members who protested with us.

We got the real message across though. No more austerity - Tories out!

After the budget - unions must launch pay fight

Save Glenfield Children's Heart Centre! Save our NHS!

'Hands around HRI' to save Huddersfield A&E