A prominent part of the discussions throughout the week was struggles of women across the world and the CWI's role in these. Here, the Socialist speaks to CWI members from four countries.

Drafts of documents discussed at the event can be seen at socialistworld.net and next week's Socialist will include an extract of the political statements agreed.

Carla, Mexico: "to end this oppression we have to transform society" 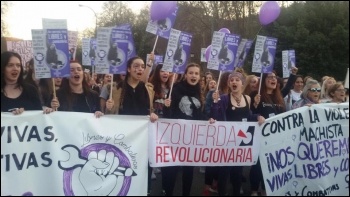 There's an incorporation of women into the workforce, which has given them some independence and broken some isolation from the home.

It's also true that at the same time this increases the burden on women because they are still doing all the work at home, as well as going to work.

We also have the situation in Mexico City, where there's much corruption, drug trafficking and human trafficking.

It's the state with the highest number of murders of women in Mexico. In the last period it's been particularly bad and that has led to an awakening, combined with the entry of women into the workforce, increasing social consciousness on the issue and on the possibility to protest.

There's been lots of expressions of the movement, many radical ones, with anti-capitalist demands that also understand the need to struggle side-by-side with working class men. There are some who don't agree that that is the correct position.

But on the other hand, that doesn't mean we don't struggle for immediate improvements for women's conditions, including against sexism within the workers' movement and organisations.

We've set up the feminist platform Libres y Combativas which has had a lot of success, especially in schools.

We've only had a few months of this platform but we have already had a lot of success and we hope to keep contributing to this struggle. 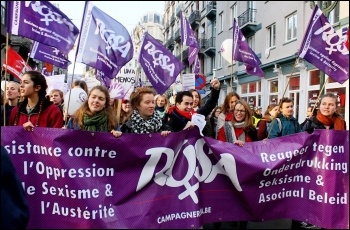 Most women work part-time because the jobs that lots of women work in don't exist full time, and also because there aren't enough public services for childcare, care of sick and disabled people, etc.

For young women another big issue is the use of women's bodies in advertising. They see how at the same time that society merchandises women's bodies, if they wear a small skirt they can be harassed for it.

There have been some protests, though it's not yet a big movement in Belgium. There's a lot on social media and in discussion all the time in schools, universities and workplaces.

Trump has also been important. He came to Brussels on 25 May and there was a protest of 10,000. There were many issues taken up - racism, environmental issues, but women's issues were probably the most prominent.

We said oppose Trump's politics and the politicians in Belgium who represent the same, and oppose the division he tries to make within the working class.

Women's struggles from the past managed to win some sexual liberation. But that was taken back to use women's bodies as merchandise in advertising, pornography, etc.

The system also uses gender stereotypes to be able to make cutbacks. They say 'women are so good at home, they should be at home more to help the kids, so we don't need to provide childcare'.

Or that women have natural 'people skills' and you don't have to give money for natural skills - so to some extent ideas like that are part of justifying the low wages in health and education.

Laura, Ireland: "it's about breaking with the repression of the past" 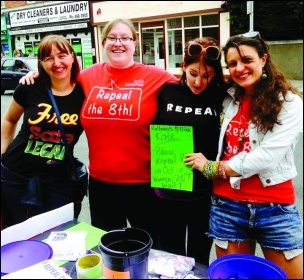 There's a crucial struggle happening against the existence of the Eighth Amendment, which is the constitutional abortion ban.

The working class and poor have been the worst affected - for example the Magdalene Laundries, which was literally the slavery of poor women.

It's a defining struggle, as it's seen as being about breaking with the repression of the past and putting a marker down for what kind of society young people, women and working class people want and desire.

Two very important things happened this year. International Women's Day was an explosion of young people onto the streets.

And the government set up a Citizens' Assembly on the Eighth, selecting 100 people randomly. They tried to set it up in a way that it would recommend only a very limited change.

But the Citizens Assembly listened to the facts and came up with a pro-choice proposal. Now there's a Dáil committee to make proposals flowing from that, which TD (MP) and Socialist Party member Ruth Coppinger has been on.

Unfortunately some don't recognise how much things have changed and don't have confidence in the fact that the majority, over 60% according to a recent poll, support abortion on request.

They don't want to see freedom for elite women and not for women of colour, trans women, poor and working class women - they want to see everyone free. 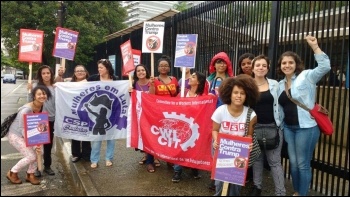 We're seeing the worst social and economic crisis in Brazil in its history, which impacts on women in a more brutal way.

Every day 12 women are killed - one of the highest rates of women's murder in Latin America. And every day ten women are gang raped.

There are elements of barbarism. Women suffered an attack from parliament - a law to eliminate the possibility of abortion for women who have pregnancy resulting from rape.

The response has been very interesting, very quick. After that law we achieved three days of big protests - 10,000 women protesting in São Paulo and others in all the state capitals.

These were organised by the feminist campaign which we participate in, called the Left Feminist Front - and then others responded to that as well.

The leader of the national parliament has been forced to say that they don't want this law to pass. So there's huge opposition in the street and everywhere. It's possible the movement can defeat this law.

The CWI has had a big role in the major cities. We are at the front of the organisation of these demonstrations in São Paulo for example - a city of 16 million people - and we were the main force that organised the big women's protests.

We demand the end of this attack and we link it to other problems. We're building a demand for the law that can legislate for abortion and ban the criminalisation of abortion.

We link it to the other social struggles - to the fight against labour reform and pension reform and against the cuts. We clearly demand a working class feminism.

'It doesn't have to be like this: women and the struggle for socialism' by Christine Thomas