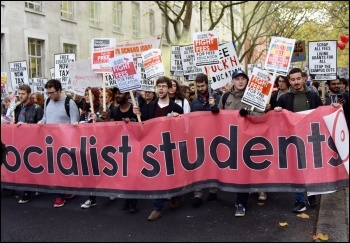 University fees are skyrocketing, leaving students with debts at an eye-watering average of £50,000. In the meantime, course quality gets left behind as universities splurge.

There are pointless vanity projects like the University of Birmingham's Dubai campus. Or bumping up the already overflowing wallets of fat-cat vice-chancellors like David Eastwood - who 'earned' £426,000 this year, plus a university-funded mansion and chauffeur.

As if this wasn't enough, the Tories are now pushing on their plans to introduce intensive two-year undergraduate degrees - costing £11,000 a year.

These courses come with reduced holiday periods, meaning many students won't have time to earn as they study. Because the Blairites and Tories replaced free education and maintenance grants with fees and loans, work has become essential for many students to get by.

How will students find time for this on an intensive course - with even higher annual fees? It is obvious this is a move to pander to the greed-driven elite, not to benefit students.

The Tories claim students will save in the long-run because the overall fee is smaller and we can enter the workplace faster. They assume we are walking out of university and straight into a well-paid graduate job. In fact we are falling head-first into the gig economy.

Staff will also have to work extra hours, yet there is no offer of a pay increase to make up for this. In reality, this means pay is being cut.

Socialist Students called on Labour's shadow education secretary Angela Rayner to move a free education amendment to the last budget. This would have been an opportunity to mobilise students and push for the scrapping of fees. It was missed.

Socialist Students demands student fees and debt be scrapped, education cuts and sell-offs reversed, and a living grant for all introduced. We also fully support the members of lecturers' union UCU who are balloting for strike action against attacks on their pensions.