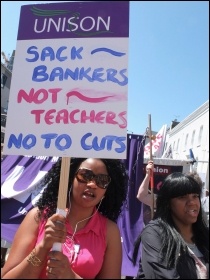 Academic staff at the University of Brighton who walked out to defend two members of staff threatened with redundancy on 23 and 24 November have won! The compulsory redundancies threatened by the university have been withdrawn.

A UCU statement said: "We can rightly feel proud that we stood firm in defence of our threatened colleagues. The support we won from large numbers of students indicates that they understand that their education is impaired by a management which attacks its staff and treats them as a disposable commodity."