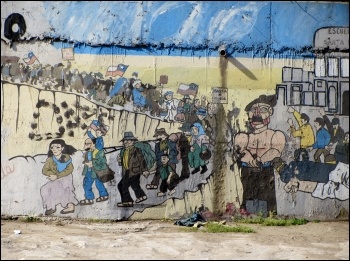 Tony Saunois secretary, Committee for a Workers' International, and in Chile 1984-85

The massacre of striking nitrate miners and their families took place in the Escuela Santa Maria, a school in the northern Chilean city of Iquique.

The battle of the nitrate miners was crucial in the early building of the Chilean workers' movement. Socialists internationally and in Chile should commemorate this important struggle and can draw important lessons from it.

At the time, sodium nitrate was decisive for the Chilean economy. The nitrate mines were situated in the Norte Grande - the 'Great North' of Chile in the Atacama desert. Most of the mines were owned by British companies and the miners were employed in slave-like conditions.

The Tarapacá province containing Atacama and Iquique had about 110,000 inhabitants. In Tarapacá and Antofagasta, the province to the south, about 40,000 workers were active in the nitrate industry. About 13,000 of them came from neighbouring Bolivia and Peru.

The mining camps were known as 'oficinas'. Everything was owned by the company, including the miners' houses and a private police force.

The miners were not paid in wages but tokens. Tokens that could only be exchanged for goods in the company-owned shops.

On December 10 a strike broke out in the Tarapacá region as the 'jornaleros' - day labourers - demanded pay of 18 pence a day and improved working conditions. This struggle became known as the "18 pence strike" - "la huelga de los 18 peniques."

This struggle in 1907 was the last in a series of battles by workers which had rocked the country from 1902. Most notable of these - until the battle of the nitrate miners - were the general strike in the port city of Valparaíso in 1903, and the "meat riots" in the capital, Santiago, in 1905.

Following the outbreak of the strike on 10 December 1907, thousands of miners and their families marched through the desert to Iquique, the provincial capital. They carried flags denoting the mixed-race workforce from Chile, Argentina, Bolivia and Peru.

The strike rapidly spread to the other northern provinces, culminating in a general strike of the Norte Grande.

The government, under the presidency of Pedro Montt, was terrified of this movement. Production and commerce across the Norte Grande was at a standstill. The government declared a state of emergency.

Additional regiments were dispatched to back up the two regiments already deployed in the region. Montt appointed General Roberto Silva Renard to control the situation. He was under confidential orders from the minister of the interior, Rafael Sotomayor, to "use all means necessary" to force the miners back to work.

Thousands of workers descended on Iquique to petition the government to intervene on their behalf. They negotiated with the acting intendant of the Tarapacá province, Julio Guzman García. In a similar way, workers in Russia had initially petitioned the Tsar to help them prior to the 1905 revolution.

Pedro Montt had given a free hand to the nitrate companies and had no interest in the conditions and lives of the miners.

As the miners negotiated with García, on 20 December workers at the Buenaventura nitrate works tried to leave. But the state of emergency suspending all constitutional rights was in force.

They were attacked and fired on by the army. Six workers were killed.

The following day the funerals of these workers took place. An estimated 15,000 miners and their families had occupied the Santa Maria school.

The strikers and their families heroically stood firm and refused to leave. The slaughter then began.

The strike committee was assembled on the roof of the school. They were the first to fall under the hail of machine gun fire.

Then - as miners, their wives and children rushed towards the soldiers, attempting to flee - machine gunners and riflemen opened fire indiscriminately.

As the victims fell, the army rushed forward into the school shooting and killing. They stormed into classrooms and slaughtered the occupants. The survivors were rounded up and marched back to work by soldiers with sabres and rifles.

How many were slaughtered on that day is not fully confirmed. The government ordered that no death certificates be issued. The bodies were dumped into mass graves.

This heroic struggle and horrific slaughter played a crucial role in laying the foundations of what was to become one of the strongest workers' movements in Latin America.

Two years later in 1909, the trade union Federación Obrera de Chile (Workers' Federation of Chile) was founded. This was under the influence of the towering figure of socialist leader Luis Emilio Recabarren alongside the nitrate miners.

In 1912, Recabarren, together with the nitrate miners and others, formed the Partido Obrero Socialista (Socialist Workers' Party). This later evolved into the Partido Comunista (Communist Party), which built a mass base among the working class.

Recabarren played a central role in these developments. He travelled to the world congress of the Communist International in 1922, where he met with Lenin and Trotsky as he reported upon his return to Chile.

The Chilean ruling class tried throughout history to erase the details of this horrific massacre. For decades it was buried.

Yet it became part of the history of the Chilean workers' movement. It was particularly commemorated under Salvador Allende's left-wing Unidad Popular (Popular Unity) government of 1970 to 1973.

The dramatic use of folk music by bands such as Quilapayún became a hallmark of all the workers' protests and meetings during the 1970-73 revolution. In 1970, Quilapayún produced a dramatic narration and song commemorating the heroic struggle of the nitrate miners.

On the centenary of that struggle in 2007, the government of President Michelle Bachelet was compelled to recognise it with a national day of commemoration. This did not prevent her Partido Socialista ('Socialist' Party) government carrying out brutal repression against the students and the Mapuche people.

Socialists internationally have a responsibility to salute this and other struggles from the history of the workers' movement. It is from such struggles that lessons are drawn for future battles, and powerful workers' parties and organisations can be built.