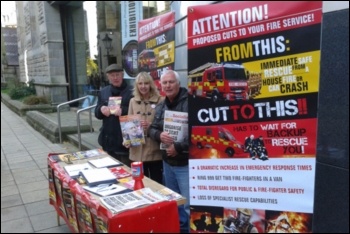 At the North Yorkshire Fire Authority meeting on 13 December, the decision was taken unanimously to reverse the decision made three years ago to reduce crewing of 'tactical response vehicles' (TRVs) to just three firefighters. These vehicles will now return to a minimum crew of four.

This is a victory for all those who have been campaigning over this issue for the last two and a half years. Socialist Party members across North Yorkshire played a crucial part in building public opposition to these proposals when they were first announced, particularly in Harrogate where we held stalls alongside local Fire Brigades Union (FBU) activists.

This decision, however, doesn't fully reverse the cuts, as the TRVs themselves were newly introduced in 2015, replacing large, more fully equipped fire engines, as well as following from a reduction of 50 firefighter posts lost between 2010 and 2015.

Nevertheless, FBU members and others involved in the campaign will be celebrating a setback for the austerity agenda in this largely Tory-dominated county.