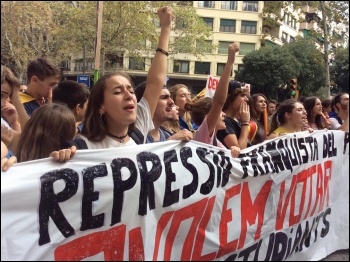 Youth and workers in Catalonia marching against Francoist repression, photo by Rob MacDonald   (Click to enlarge)

Movement mobilises once more for the Catalan republic

The Catalan election on 21 December was a massive defeat for the Spanish nationalist 'bloc of article 155' - the imposition of direct rule in Catalonia - and an even bigger blow to this bloc's main force, the right-wing People's Party (PP) of prime minister Mariano Rajoy.

The capitalist media try to minimise the magnitude of this defeat by talking about the 'victory' of Ciudadanos (right-wing Spanish nationalist party) but the reality is different. Even if we take only the votes of Junts per Catalunya (JuntsxCat, the list led by self-exiled Catalan president Carles Puigdemont) and ERC (Republican Left of Catalonia) together, they won over 800,000 votes more than Ciudadanos.

This result is even more important given the fact that the electoral campaign was full of irregularities, threats and desperate attempts by the Spanish and Catalan ruling classes to prevent mass support for a Catalan republic being expressed.

After calling the elections, the PP government tried to demobilise the vote in favour of a Catalan republic by stating that even if these parties won and tried to fulfil the mandate of the people, the only result would be the maintenance of article 155 and more repression.

The government has opened up new judicial proceedings against leaders who participated in the 1 October independence referendum, like Marta Rovira, Artur Mas, Ana Gabriel and others.

The campaign of fear promoted by the Spanish and Catalan capitalists since 1 and 3 October (with the withdrawal of companies from Catalonia, threats of economic collapse, and apocalyptic talk of civil war) continued and intensified in the days prior to the election. JuntsxCat and ERC have also been obliged to run their campaigns without their leading candidates (in prison or exile).

Far from representing a shift to the right, these results represent a new impressive mobilisation of the same masses who confronted police batons and rubber bullets on 1 October.

More than two million people have again shouted loud and clear to all those willing to listen, who have not been silenced by fear or by parliamentary cretinism, that they want to break with the repressive regime of 1978 (post-Franco constitution) and will not allow their struggle for a Catalan republic which guarantees real social improvement and change to be shut down.

The biggest election loser was the PP - the most corrupt party in Europe, inheritors of Francoism, champions of repression and censorship. It lost almost half its votes since 2015, and went from eleven to three seats, not even able to form a parliamentary group.

Ciudadanos won 300,000 new votes but these are votes mostly taken from their rivals, including traditional Socialist Party (PSC) voters. These voters preferred Ciudadanos (who they had still not seen in government) to the promises of "regeneration" from the PSC which is more and more discredited. 165,000 PP voters also switched to Ciudadanos.

Ciudadanos' campaign was based on the absence of any concrete programme (its programme is that of big business, the same as the PP). Inés Arrimadas, its leader, made constant demagogic declarations, calling for attention to be paid to social problems rather than the independence process and using the flight of companies and capital to present a nightmare scenario if independence was declared.

This was all mixed up with lies designed to play on the feelings of wide sections of the Catalan population with origins in the rest of the Spanish state.

This demagogic campaign allowed Ciudadanos to also win a layer of workers from industrial neighbourhoods in the 'red belt' of Barcelona and Tarragona, who have been hit by the crisis and demobilised by the collaborationist policies of the major trade union (CCOO and UGT) leaders, and disappointed by the lack of a strong left alternative.

Incredibly, the leaders of Catalunya en Comu (Catalan electoral list supported by left party Podemos and United Left - IU - whose main component is the Communist Party) and Unidos Podemos (Spanish Left electoral list) refused to put the fight against the reactionary monarchist bloc and article 155 at the centre of their campaign. They didn't link the defence of the result of the 1 October referendum with a mobilisation for social demands.

They even refused to clearly denounce the existence of political prisoners or demand their freedom.

The rhetoric of the Unidos Podemos and Catalunya en Comu leaders repeated the false arguments of Ciudadanos, saying that the referendum was illegitimate or that the struggle for a republic was to blame for the threat of fascism. This all served to strengthen reaction and facilitate Ciudadanos capturing the votes of a layer of workers who were demoralised and affected by the campaign of fear.

The leaders of Unidos Podemos and Catalunya en Comu have behaved like old-fashioned social-democratic politicians, appealing to "love" and "cordiality" to "reconnect" society, at a time when the PP is ruling Catalonia with the police baton, and despite the PP having only three MPs in the Catalan parliament.

One of the results which will have surprised many left activists is that JuntsxCat won more votes than ERC within the independence camp, and that the CUP (Popular Unity Candidacy - a left-wing Catalan independence party) lost votes and seats.

However, it would be mistaken to identify votes for JuntsxCat as political support for the right-wing PdeCat party (led by Puigdemont).

Hundreds of thousands of young people, middle class and even layers of workers who have fought against PdeCat voted for JuntsxCat because they see Puigdemont as someone who has fought against the state and who is denouncing repression and organising a struggle from exile.

The JuntsxCat list campaign was also clearer in its rejection of repression than that of the ERC leaders, who said they would accept article 155 and the constitution.

The results for the CUP also show how it is not enough to merely state that the republic must have a social content in electoral rallies.

The CUP played a key role in guaranteeing the referendum on 1 October and in fighting to respect its result through the Committees in Defence of the Republic.

However, the CUP is paying for its leaders' mistake, in deciding to prop up the PdeCat in government, vote in favour of its budgets and generally tail-end the other pro-independence parties.

What will happen now? The PP has sunk in Catalonia and Ciudadanos has swallowed its electoral base. This fact has deep political consequences for the whole Spanish state. It is a serious threat to Rajoy, because the surge of Ciudadanos could be consolidated.

For this reason, it is even more improbable that the government of Rajoy and the state will meaningfully negotiate with the Catalan independence movement, or even agree to a constitutional reform.

If they do something like that, they know they will leave the way open for Ciudadanos to undermine them further. The PP will continue polarising politics around the Catalan national question, and will not hold back.

The judicial processes and the repression will not subside, quite the contrary.

The failure of Unidos Podemos in Catalonia also has great consequences. Without understanding the role of national oppression in the struggle to transform society, Podemos has intervened in Catalonia with a position full of inconsistencies and concessions to Spanish nationalism. The refusal of Podemos's leader Pablo Iglesias to lead the fight for a Catalan republic, his turn to the right in recent months, and the failure of his objective of removing Rajoy through parliamentary pacts with Psoe, are a guarantee for new disasters.

The ruling class have not been able to end the revolutionary crisis which was opened up by the victory of the masses against repression on 1 and 3 October. The political and social crisis in Catalonia will continue and sharpen, and the legitimate aspirations of the Catalan people will not be satisfied by this reactionary state.

In the current conjuncture, it is key that the social movements and parties of the left who have carried the weight of the struggle for a Catalan republic and the right to decide, resume mobilisation on the streets.

This whole process, and recent events, have also demonstrated the need to build a consistent alternative that is not subordinated to PDeCat or to bourgeois and petit-bourgeois politicians who have shown their inability to take the struggle for self-determination to the end, and do not want to break with the logic of capitalism (which is the cause of national and social oppression).