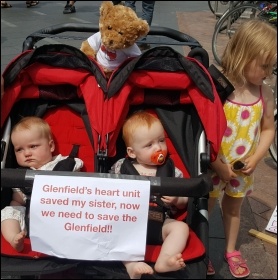 The heroic victory of thousands of community campaigners in Leicester to defend their congenital heart surgery unit, with Socialist Party members playing a leading role, was vindicated straight away. The news arrived just before Christmas that days-old Vanellope Hope Wilkins had been saved there.

Surgeons in the rescued heart centre at Glenfield Hospital carried out a pioneering operation to correct a rare condition that caused Vanellope's heart to grow outside her body, 'ectopia cordis'.

With chances of survival less than 10%, the tremendous skill and dedication of staff at the hospital saved the baby's life in a series of procedures that started within seconds of her birth. They involved 50 staff, three operations, and the construction of an artificial ribcage over the course of a week.

NHS England bosses should be ashamed and embarrassed after their attempts to shut down the unit last year. They only failed because of the tremendous battle by local residents and workers.

"The Save Glenfield Children's Heart Centre campaign is enormously proud of our role in saving this centre that saves children's lives. People power can win."

NHS England's arguments for closure were flawed from the start. The targets bosses wanted to set - 125 operations per surgeon per year - were arbitrary. Closure of the heart centre would have left the East Midlands as the only region in England without a specialised unit.

The campaign involved thousands in a large number of demonstrations and meetings, with 130,000 people signing the petition. It helped 7,500 people engage in a deliberately complicated 'consultation' exercise.

Importantly, community campaigners linked up with the trade union movement, getting backing from local and regional union bodies.

The operations to save the life of Vannellope Wilkins demonstrate even more the importance of fighting to save every aspect of our NHS.

They also give a glimpse of what more would be possible if the NHS was publicly owned and properly funded, with genuine democratic control involving the workers and users of the service.

But of course the war is far from over. The many local struggles need to be linked up - which 'Health Campaigns Together' aims to do. And health union leaders need to listen members and call industrial action.

We need to unite the communities fighting for their local services with each other and with trade unions in the NHS and beyond, and campaign for a national fightback to save our NHS.