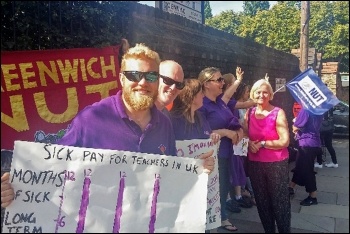 After months of action including six days of strikes at Charlton Park Academy in south east London, members of general union GMB and the National Education Union (NEU) have gained a well-deserved victory. 'Burgundy and Green Book' conditions have been won for all staff beginning on 1 December 2017.

Since Charlton Park Academy (CPA) became an academy in 2012, new staff were no longer protected by national terms and conditions (Burgundy and Green Book). These staff employed on the new academy contract saw serious reductions in their sick pay entitlements.

Staff became aware of the situation when one teacher who had experienced an industrial injury and was off work discovered she was only entitled to four weeks sick pay and had to pay her rent using a credit card.

Strikes began in July 2017 which involved both NEU and GMB members with over 90 staff at the school taking part. Pickets have been vibrant and determined and have excellent support from the local community.

On 29 November, after three weeks of talks at conciliation service Acas, agreement was reached between all parties to secure Burgundy and Green Book rights for all staff with the proviso of a trial period to monitor its implementation.

We are immensely proud of the unity and dedication of GMB and NEU members and what we have achieved together. We have protected the dignity and rights of all staff at CPA and reminded every education worker that when we stand together we can win. We hope we inspire others to do the same when their conditions are under threat.

We would also like to thank all the NEU branches that sent cheques and donations to sustain support staff during the strike. This vital financial support was key to the victory of this dispute.

Thanks again to all of you who stood with us!