Link to this page: https://www.socialistparty.org.uk/articles/26693 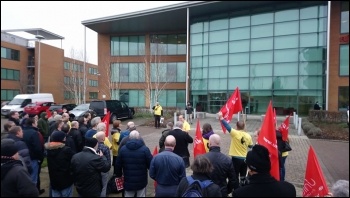 The new year hasn't put an end to the disputes taking place across Manchester, in fact it has intensified them.

Mears housing maintenance workers are in their ninth week of action and still striking four days a week.

Their trade union Unite has put forward a proposal to Mears and Manchester City Council on how they can fund parity in pay across the workforce and bring it closer to the levels of pay received by maintenance workers elsewhere in the city.

While waiting for their response, strikers will be escalating the number of protests outside Northwards Housing Association offices (who they do the maintenance work for) and plan leafleting of tenants to get them on board.

They held a very successful protest outside the Monsall office on Friday 12th January.

First bus drivers, who have been out at least one day a week since the beginning of October, are striking three days every other week for the foreseeable future.

This is after First offered a measly 4p an hour increase just before Christmas. Drivers at the Rusholme depot that serves south Manchester are currently paid £3 an hour less than drivers in the north of the city. After Unite rejected this 'offer', First is now refusing to go into talks at ACAS.

Supporters of the strike helped block buses driven by scabs from leaving the depot on Wednesday 10th January and faced heavy policing, including being shoved around and two arrests.

Footage of this police aggression being circulated on social media has attracted condemnation and outrage from other trade unionists, with the expectation that the next mass picket line will be even bigger.

In the same week, Manchester based trade unionist Ian Allinson received news that he had lost his job at Fujitsu (while on compassionate leave for a family funeral).

He was told that he could not work his notice period and that his last working day would be Friday 12th January.

Union activists have reported a clear strategy by Fujitsu management to target them for redundancy in response to strike action in Manchester during 2016/17 - to weaken the union branch in order to force through job and pay cuts and other attacks on terms and conditions.

But there has been a defiant response. In a marvellous display of solidarity there was a big protest outside Fujitsu on Ian's last day of work. Fujitsu workers came out in their lunch breaks to pay tribute to Ian and vowed to continue to fight. Striking Mears workers went from their protest outside Northwards to Fujitsu to bring support.

Striking bus drivers also came down. The Fujitsu branch announced they would be taking strike action at the end of this month too.

Despite all of these workers being in dispute with different companies and doing completely different jobs, there is a huge sense of solidarity building between them.

There will be a joint social and fundraiser taking place and potentially more joint protests and events.

This version of this article was first posted on the Socialist Party website on 12 January 2018 and may vary slightly from the version subsequently printed in The Socialist.