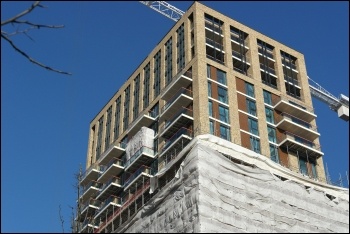 If Greenwich council and property developers get their way Woolwich's skyline in south London will soon be unrecognisable.

A new development, including a 27-storey tower block, will overshadow General Gordon Square and the Royal Arsenal.

At a time of a huge housing crisis in London more homes will sound good. Unfortunately none of the houses built will be available at a social rent. Just 20.2% will be 'affordable' which amounts to anything up to 80% of market rents.

This comes after Greenwich council approved a 245-home scheme with zero social rented units in Abbey Wood and another in Woolwich with 300-homes and only 6% social rental units.

There are currently 16,000 people on council house waiting lists in the borough. Yet the council would prefer to knock down existing council estates and sell them off.

The reality of so-called regeneration is that ordinary working class people who live in an area are forced out.

Woolwich, like so many parts of London is becoming a playground for property developers and speculators.

As prices go up people are being forced to the outskirts of the city. From there they will have to use overcrowded, overpriced transport systems to find work.

The Socialist Party welcomes the call made by Jeremy Corbyn at Labour Party conference for all regeneration schemes to be subject to a local ballot.

Yet the scheme in Woolwich is being enthusiastically driven through by the Labour council.

We say the council must immediately halt the development and act on the words of their party leader and carry out a genuine consultation with residents.

Working class people have endured years of Tory austerity and gentrification carried out by the Blairite council locally.

We say rather than housing only available to the rich, the council should start a programme of council house building to serve the housing needs of the poor and ordinary workers.

The council should also introduce rent controls to stop private renters being ripped off by fat-cat landlords.

The council could help build a mass campaign to demand more money for Greenwich from the government. Alongside this they could refuse to make cuts and use their reserves and borrowing powers to set a budget based on the needs of ordinary Greenwich residents.