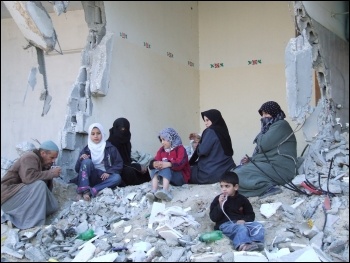 No sooner had the Iraqi government officially declared its fight against Isis over on 9 December than Theresa May congratulated the British government for its role in "supporting the Iraqi security forces, including the armed forces and the Peshmerga."

Before we applaud the government though, let's examine its role in Iraq.

The RAF has conducted more than 1,200 airstrikes in Iraq and Syria, second only to the United States.

According to the Ministry of Defence (MoD), this cost the UK taxpayer £265 million and killed an estimated 3,000 "extremists," some of which undoubtedly harmed Isis.

But what is the human cost of these airstrikes? Incredibly, the MoD has claimed there is "no evidence that RAF strikes have caused civilian casualties."

If the RAF truly has not caused any civilian casualties, this would be "unprecedented in the history of warfare," according to Chris Woods, director of the international air strikes monitor Airwars.

This does not even take into account that it is unclear how it is decided someone is an 'extremist'. Nor that much of the bombing was in densely populated urban areas.

Airwars estimates the minimum number of civilians killed by coalition airstrikes as 5,961. Attributing none of these to the RAF seems like folly.

Even if we ignore the "collateral damage," British imperialism's role in Iraq can hardly be considered positive.

After all, the UK was the USA's major ally in the 2003 invasion of Iraq. That killed thousands of civilians, and predictably created the breeding ground for Isis.

What good, then, has come of this invasion? Saddam Hussein, a brutal dictator, was defeated and hanged. But the situation for most Iraqi civilians has not improved.

There have been over a thousand suicide bombings in Iraq since 2003, most of them targeting civilians.

The campaign group Iraq Body Count has recorded over 180,000 documented civilian deaths from violence, mostly in English-language newspapers which makes it likely this is a severe underestimation.

And terrorists have targeted European cities in retaliation for the relentless air strikes, killing hundreds.

Estimates for Iraqis displaced by Isis range from 3.5 to five million. The British state is taking in only a tiny fraction of the refugees for which it bears a substantial responsibility.

You can't help but wonder if all this suffering would have taken place had Iraq not had any oil reserves. In any case, Jeremy Corbyn was proven right once again in his opposition to the war.

British foreign policy is dictated by the interests of Britain's capitalist class, not the working class and poor of Britain or anywhere else.

This is why the atrocious regime in Saudi Arabia is the British state's ally, and why civilian casualties are labelled "collateral damage."

Socialists oppose all imperialist 'interventions' and wars. We oppose the airstrikes, and call for those responsible for the Iraq war to be held accountable.

We oppose the supply of arms to 'moderate' rebels and oppressive regimes like Saudi Arabia.

A socialist foreign policy would be based not on interventions, wars and profit interests, but genuine democratic workers' cooperation, international solidarity and peace.