Link to this page: https://www.socialistparty.org.uk/articles/26762

Mohamed Satti has been released! The global solidarity campaign has succeeded. Click here for short report on the CWI website. 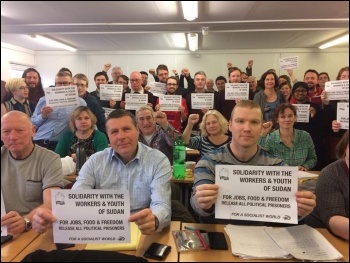 CWI supporter Mohamed Diaeldin Mohamed Satti, 21, known as "Hamudi", is among the protesters who have been arrested by the Sudanese state last week, as part of the brutal response of Al Bashir's regime to the wave of protests against skyrocketing prices and austerity. Hamudi was arrested last Wednesday, as he participated in a peaceful march in central Khartoum.

Reportedly more than 400 political activists and protesters are currently detained, including nine members of the political bureau of the Sudanese Communist Party, leading members of the National Umma Party, and long-standing female activist Ilham Malik Salman Ahmed. This hysterical campaign of mass arrests has extended to include Sudanese and foreign journalists who were reporting about the protests, and highlights the regime's fear that any form of even mild criticism of its policies could be the spark that lights the fuse of a mass revolt.

According to protesters who have been released, the security services are forcing the detainees to sign a document pledging to stop engaging in any demonstrations or political activities in the future. Those who have refused to sign, like Hamudi, have been kept inside.

The prisoners are refused visits by their families, have had their heads shaved and are being physically mistreated.

The CWI demands the immediate release of Mohamed Satti "Hamudi" along with all the other political prisoners.

This version of this article was first posted on the Socialist Party website on 22 January 2018 and may vary slightly from the version subsequently printed in The Socialist.