Editorial of the Socialist issue 979 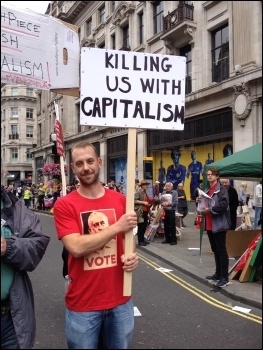 Outsourcing, PFI, privatisation, as in Carillion, is 'reverse socialism'. It is nothing other than a highly efficient wealth transfusion system. We need a movement to kick out these profiteers from public services with compensation only paid on the basis of proven need - and not to the fat cats.

Via disastrously inefficient provision of services, cuts to workers' pay and conditions and the public land grab, outsourcing transfers both money and power from public services - that is in effect from the working class, struggling middle class and youth, to the fat cat bosses.

The Carillion crisis proves the case for ending outsourcing completely and removing services, utilities and railways from the claws of the profiteers. This crisis needs to be used to make the case for democratic socialist planning of the economy. That means replacing the capitalist system, which has the pursuit of profit as its main aim, not meeting the needs of people. Carillion and the scandal of privatisation illustrates this.

As George Monbiot has pointed out in the Guardian, "PFI contracts specify that if there is a conflict between paying the private provider and delivering public services, the payments must come first... Money is officially more valuable than life."

The NHS funding crisis, creating so much pain and suffering, is made so much worse by the privatisation crisis. Companies such as Carillion, Interserve and Kier Group that have built NHS hospitals using PFI deals have made pre-tax profits of £831 million over the past six years.

The National Audit Office report is devastating - it shows that PFI deals demand that we hand over nearly £200 billion to contractors for at least 25 years. The cost of privately financing public projects can be 40% higher than keeping them in-house, ie under public ownership. Meanwhile jobs and services get slashed and austerity roams the land.

A mountain of evidence existed prior to Carillion that proved the case against privatisation going back to the Potters' Bar rail crash, collapsing schools, sky-rocketing bills, legion job losses, black-listing and so on. However, for decades both Tory and Blairite governments have pursued privatisation with vim and vigour, policies which in effect loot the state.

Why? Because they represent the capitalist class - the big business bosses, the bankers - and act in their interests. Privatisation was a miracle for the fat cats - it represented a source of rapid and almost guaranteed profits when the obvious fields of investment in production became less profitable as the post-war boom started to weaken. And they see it as a route to reduce the welfare state and public services meaning that, like Trump intends, the richest pay even less corporation and income tax.

In 2013 a YouGov poll found that 84% thought that the NHS should be run in the public sector, and support for the renationalisation of energy companies, the Royal Mail and the railway companies reached 68%, 67% and 66% respectively. The election of Jeremy Corbyn to Labour's leadership and the support for his anti-austerity manifesto last June were expressions of this opposition. In fact support for renationalisation has grown to 80% now supporting taking rail and utilities back in house.

Fear of the Carillion crisis turning this support into a movement against privatisation and of it drawing more far-reaching anti-capitalist and socialist conclusions has spread panic among the defenders of capitalism and has them arguing that action is needed - but action that does not threaten their system.

Unsurprisingly this is clearly expressed in the house journals of capitalism - the Financial Times and the Economist. The Financial Times' concern is that "the real political battle is over whether the private sector should be running public services at all."

It argues that the problem is not with outsourcing per se and the government needs to "do far more to demonstrate that private profits are a legitimate reward for better services if it is to win round a sceptical public." Cue Theresa May weighing in to threaten punishment for bad bosses in the hope that this will mean privatisation and marketisation of everything from children's services to elderly care can continue.

Defenders of capitalism also exist inside the Labour Party. Anti-Corbyn Labour MP Stella Creasy has entered the debate saying Carillion is like a "legal loan shark" and outsourcing is like "using a payday loan to build a school". While her similes appear strong they cannot mask the weakness of her solution - a windfall tax on outsourcing companies.

Socialists argue that the rich should be the ones who pay for the economic crisis, and we support dramatically increased taxes, not for the working and middle classes, but for the tiny elite at the top of society. But we also recognise that the 'markets' - that is capitalism - will never meekly accept dramatically increased taxation and regulation.

Big corporations already refuse to pay the levels of taxation agreed. Any measure that does not end the privatisation of services will not solve the problems created by it.

A windfall tax also does nothing to address the democratic issues - of private companies having control over public resources and services. Academisation has the effect of transferring billions of pounds worth of publicly funded assets in the form of school buildings and land into the hands of private sponsors who are able to set their own pay, conditions and working time arrangements for newly appointed teachers.

Polly Toynbee writing in the Guardian gives many examples of the "zero flexibility" allowed councils in these contracts. So it is enormously welcome to hear Jeremy Corbyn say that a Labour government "will re-write the rules to give the public back control of their services... if these are public contracts then we should be the manager and not have a middle man like Carillion creaming off the profits."

Toynbee then asks "where is the border between sensible and senseless private involvement in public services?" "No one expects the NHS to manufacture beds or drugs," she argues. Certainly we call for cancelling all NHS Private Finance Initiative (PFI) payments which would save £2 billion a year and should be a major demand of the 3 February demo.

But so should a movement fighting for the NHS call for the nationalising the pharmaceutical industry which could save £3 billion a year of profits, and enable research to be done to meet patients' - not shareholders' - needs. And that is what is crucial here.

Jeremy Corbyn told May at PMQs that "these corporations need to be shown the door. We need our public services provided by public employees with a public service ethos and a strong public oversight".

The Carillion crisis has revealed both the need for a struggle to end privatisation and the profit system, and the battle that will be fought by the defenders of the capitalist system. To counter this, the workers' movement would need to organise active support for nationalisation.

That means taking a cue from the RMT transport union which has stood firm on rail nationalisation and against all moves towards privatisation. It also means a battle in the Labour Party to remove the Blairites.

This includes in the councils. Faced with 40-50% cuts in local government funding Labour councils have opted to hand services over to private companies hand over fist. Where cuts-making councillors can't be reselected by opponents of austerity and privatisation, they can be challenged in the May elections.

And it means building the fight for socialist nationalisation which would be based on popular democratic control involving service workers, trade unions and users.