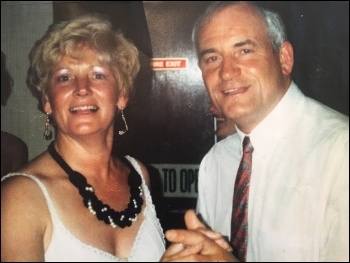 Maureen Mulhearn with her husband, Tony   (Click to enlarge)

It is with great sorrow that we report the death of Maureen Mulhearn, lifelong partner of Tony Mulhearn.

With Tony, a leader of the immortal struggle of Liverpool council in 1980s, she played a vital and massive role in her steadfast support for him and for the mass struggles of her native city against the ravages of Thatcherism and capitalism.

Although not formally a member of the Socialist Party and its predecessor Militant, she was an enthusiastic and forthright supporter all her life.

For that alone she will be remembered and saluted by many, even those who did not meet her personally. She supported ours and Tony's common struggle for a new society of human solidarity - of socialism.

To those who did forge bonds of friendship with her, she will always be remembered for her serene, generous but at the same time feisty personality.

She will be greatly missed by all of us alongside Tony, her seven children, grandchildren and great-grandchildren, as well as by members of the Socialist Party in Merseyside and elsewhere.