Children were divided into rich and poor playgrounds during lunchtime at an 'academy' primary school in the West Midlands.

After exposure by the Mirror, the school cancelled the policy. But this Ryanair approach to schooling, with state education dismembered into saleable packages, is in the profit-driven DNA of academies. 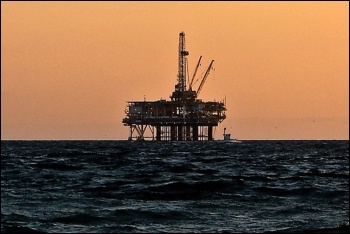 Workers decommissioning a BP oil rig got just £2.70 an hour   (Click to enlarge)

Bosses can legally pay less than the minimum wage to workers doing dangerous jobs out in the North Sea.

Transport and maritime union RMT has found the latest government guidance on rates only extends 12 miles into British waters.

It seems staff decommissioning a BP oil rig received just $45 for a 12-hour shift. That's about £2.70 an hour, working all day with heavy and flammable materials, over a freezing cold sea.

Campaigners have beaten a government attack on disability benefits. 150,000 people will now receive more of the support they need.

The Tories had tried to change the rules around the 'personal independence payment' (PIP) to exclude some mental illness sufferers. PIP is itself an attack, replacing the superior 'disability living allowance' benefit.

After a successful legal challenge, the government considered appealing and emergency legislation to retain the brutal cut. But a statement on 19 January conceded defeat.

The climbdown follows persistent campaigning by disabled rights activists including the Socialist Party.