Link to this page: https://www.socialistparty.org.uk/articles/26789 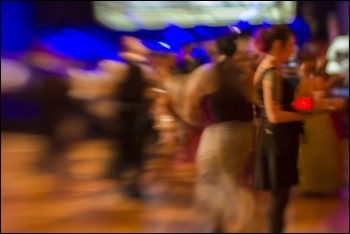 Despite the ongoing slew of allegations revealing the endemic nature of sexual harassment in Hollywood and Westminster and despite the formal denunciation of this culture by the establishment, the scandal over the Presidents Club charity dinner shows that behind closed doors the rich and powerful feel as entitled to women's bodies as ever.

Undercover journalists for the Financial Times described the groping, propositioning and harassment experienced by hostesses, the only women at the men-only charity auction.

The women were required to wear revealing outfits with matching underwear and to sign a non-disclosure agreement, which they were not provided with a copy of, or given a chance to read.

The attendees of the event were from the select elite of British business, politics, finance and entertainment.

Being auctioned were the chance to have dinner with Boris Johnson and Bank of England governor Mark Carney as well as plastic surgery to "add spice to your wife".

The revelations have led to charities returning donations, the closure of the Presidents Club itself and the resignation of event organiser David Meller from the Department for Education board.

Even the Tory Minister for Women, MP Anne Milton, was forced to admit in parliament: "There is an association between rich, wealthy people and this sort of behaviour".

While it is clear that the imbalance of power which can lead to a sense of entitlement and objectification is pervasive among the super-rich, it is also endemic in workplaces across the whole of society.

Women workers in bars, restaurants and hotels especially face daily sexual harassment but don't speak out for fear of losing their jobs.

Many of the hostesses at the Presidents Club were students or part time actors, struggling to advance their careers and make ends meet.

If not for the exposé, it is possible the women would never have come forward, not wanting to risk future employment, or due to feeling reliant on their harassers for job opportunities.

It cannot be left up to brave individuals to speak out, possibly putting their livelihoods at risk. The scale of the #MeToo phenomenon demonstrates the potential for a united women's movement, but this unity must be built in the workplace and community not just on social media.

Organised in trade unions, these women, together with their male worker colleagues, can have the power to fight against the threat of both their own harassment and assault as well as against the power imbalance between workers and the bosses created by the exploitative capitalist system.

This version of this article was first posted on the Socialist Party website on 25 January 2018 and may vary slightly from the version subsequently printed in The Socialist.