Darkest Hour: not the usual flattery of brutal Tory Churchill 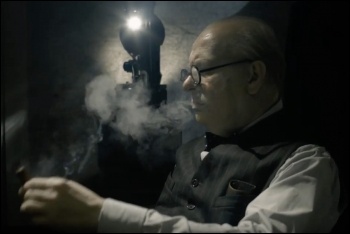 Gary Oldman as Churchill in Darkest Hour   (Click to enlarge)

Watching Gary Oldman as Churchill in 'Darkest Hour' at the Tyneside Cinema, I felt quite emotional. I was angry - if it was left to the Tories in 1940 they would have surrendered to Hitler.

The truth is that it was the working class and poor of each side that did the fighting, including the oppressed peoples of the soon-to-be-former British Empire. In numerical terms, nothing even comes close to the indescribable sacrifices of millions upon millions of Soviet workers.

What part did Churchill, one of the most brutal anti-working class Tories, play in this?

It is clear in Joe Wright's film that Churchill wavers, considering a peace deal with Hitler, and the real heroes were the working class characters: the stenographer, the passengers on the London Underground who Churchill had ignored for most of his political career.

Churchill thought these people were fighting for Empire. But they weren't - they were fighting for a better world where ordinary people could live with dignity, a welfare state and decent living conditions - not a return to Churchill's throwback vision of empire, and the hunger, poverty and lockouts of the 1920s and '30s.

It falls to Gary Oldman, one of the most brilliant working class actors of his generation, to portray Churchill. Beneath Oldman's fantastically crafted piggy Churchill makeup, by the amazing artist Kazuhiro Tsuji, you could still see some of the punk anger of 'Sid and Nancy' and his early films. Robert effing Hardy it ain't.

I was heartened that Darkest Hour was at least not the usual flattering biopic of Churchill. It goes some way to show it was working class pressure that influenced the decision to fight on in 1940 - and just how close the spineless British ruling class was to following its European counterparts in capitulating to fascism.

Caerphilly & RCT Socialist Party: What is fascism and how can we fight it?