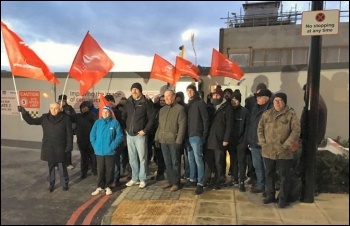 76 electricians on the Crossrail construction site have been taking part in industrial action. The construction company Balfour Beatty has ceased paying workers a finishing bonus. This payment is standard across the industry and is to be made in the event of redundancy.

The bonus is vital as all of the electricians on the site come from outside of London. They have all had to arrange temporary accommodation while working on the project. Without the bonus they all risk getting into financial difficulties when they give notice to their landlords.

Having already taken three days of strike action, workers will be coming out again on 14 and 21 February.

Workers on the Crossrail project have faced one attack after another. Last year workers at the Tottenham Court Road site took action after their bonuses were stopped. The project is also well known for its victimisation of trade union activists.

Balfour Beatty was found to be knee-deep in the blacklisting scandal. They were one of eight companies forced to collectively pay an estimated £75 million in compensation to workers excluded from construction projects because of their trade union activity.

Crossrail is the biggest taxpayer-funded construction project in Western Europe. Yet for contractors like Balfour Beatty that isn't enough. They are also intent on taking from the people carrying out the work as well.

The Socialist Party calls for the whole trade union movement to build solidarity and support for the Crossrail workers and their struggle. A victory against these vicious anti-union, anti-worker bosses would give confidence to workers across the whole industry and beyond that it's possible to fight to defend and improve conditions and win.