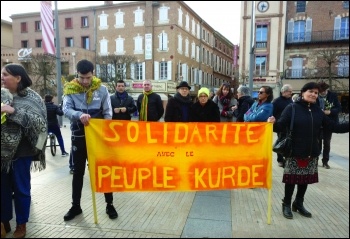 Over 100 people turned out on 10 February in the centre of Albi, south west France, to demonstrate against the bombardment of Afrin by the regime of Turkey's autocratic president Recep Erdogan. Most of the demonstrators were of Kurdish origin, including refugees from Afrin.

Erdogan is intent on smashing the aspirations of the Kurdish people for a homeland.

He has justified this latest military invasion by claiming the YPG Kurdish militia in northern Syria (which has been backed by the US administration as a proxy force against Isis) is linked to "terrorist" PKK Kurdish separatists in south east Turkey, an area where the Turkish military has imposed virtual martial law.

The town of Afrin has been a refuge for Syrians seeking to escape the horrors of the Syrian regime and the devastating war. From a population of 172,000 in 2004, the town houses more than 1 million today.

Afrin is an important symbol for Kurdish people, with a reportedly democratic and inclusive administration.

Afrin's refugees and Kurdish people denounced the lack of worldwide condemnation of Turkey's attack: "Using napalm and weapons that are banned by the UN.

"The silence of European Union, United States and the allies make them complicit with Turkey".

Protesters made it clear that the attack on Afrin is an act of genocide, and Erdogan a war criminal.

A similar demonstration took place in Toulouse on 27 January, with over 250 demonstrators.