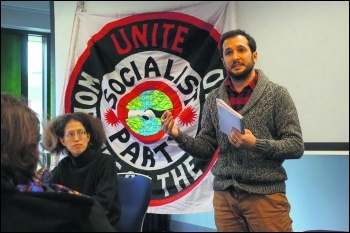 The recent earthquake in South Wales pales in comparison with the shifts in the political landscape described at the Socialist Party Wales conference on 18 February.

Members from across Wales gathered in Cardiff to discuss the successes and challenges of the past year, while planning for the future.

There has been a seeming pause in the struggle after the excitement of the general election, with layers of the wider labour movement seemingly willing to wait for a Corbyn government. But the working class cannot afford to wait for an 'eventual' election.

The reality is that we do have a Labour government in Wales led by First Minister Carwyn Jones and his fellow Blairites who willingly implement the cuts.

This attitude is synonymous with Labour councils across the country where we are told there is no legal option but to become Tory policy executors.

Further contributions were made by trade unionists about the upcoming disputes and strikes planned by university workers and civil servants.

The importance of the #MeToo movement was also highlighted with a Welsh Socialist Party women's meeting scheduled for 2 March in preparation for International Women's Day.

Wales Socialist Party showed its unwavering commitment by raising a staggering £12,000 for the building fund (to help find a new national premises for the Socialist Party as we're being evicted) with more pledges to come. A further £360 was raised for the fighting fund appeal.

Socialist Party Wales is the largest left force in Cardiff and has been dubbed 'the unofficial opposition' by members of Swansea council.

Socialist Students and Young Socialists have led the youth movement in Wales, organising a show of solidarity with striking lecturers.

The success of this conference mirrors the way Socialist Party Wales acts in its everyday work and has set the tone for a year of solidarity and struggle to come.